WHAT WOULD JACK CASEMENT SAY? Summer is construction season for the railroads, and Union Pacific is active in DeKalb. The railroad and the city agreed that all the downtown grade crossings will be renewed this week, and Union Pacific is replacing the stick-rail track in the existing crossings with welded rail on concrete ties. (I'll leave it to the technically-minded to sort out whether electrically insulated sections either side of the crossings turn welded rail into stick rail.)

On my visits to Europe, rail-minded colleagues and acquaintances sometimes express surprise at the size of North American freight trains and that maintenance work goes on under traffic. The first illustration is for such readers. Some maintenance equipment is on the north main, and a good-sized stack train approaches on the south main. Both tracks are signalled for operation in both directions, and if the foreman in charge of the trackwork approves, the train can pass at normal speed. 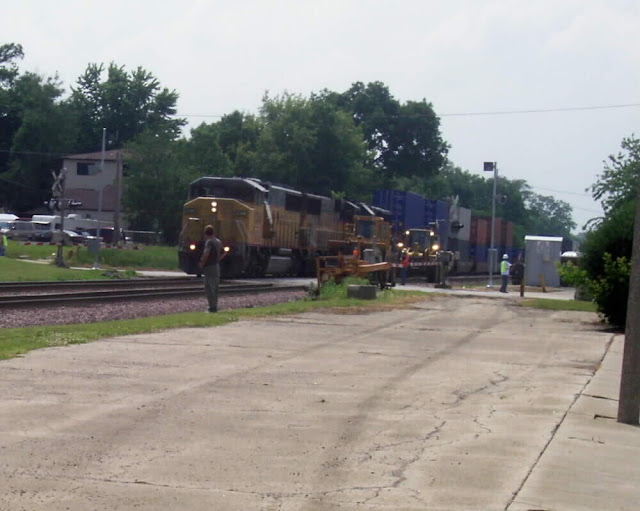 It's not often that one sees a Union Pacific diesel that's been tagged, but here one is. It's heading up the Harsco Track Renewal train. Specialist contractors are doing a lot of the work railroads used to do in-house, including locomotive maintenance, track repair, and picking up wrecks. Union Pacific has a long-term contract with Harsco to do track maintenance. 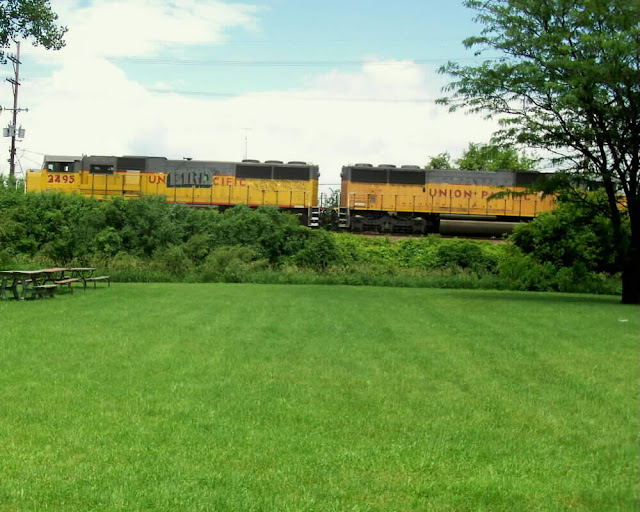 The train is over half a mile long. Most of it is flatcars holding loads of ties. In front of the diesels is the existing track with wood crossties. Behind the train will be new rail on concrete crossties.

Most of the train is special flatcars with stacks of crossties. Concrete ties have to be shuttled back to the magical machine that rebuilds the track, and the wood ties take their place. It's all very Adam Smithian, with the efforts of the men being augmented by fancier machines.

There are three of these traveling cranes, which look a bit like slab carriers at a steel mill. I wonder if someone at Harsco's mill services division had an inspiration. The trick, however, is to build a slab carrier to fit within the railroad's loading gauge (not too high and not too wide.) Operating these things is no easy trick, either, as they are moving masses of material on a train that is moving forward about as fast as an infant can crawl, and subject to slack action as well as stopping, reversing, and proceeding. 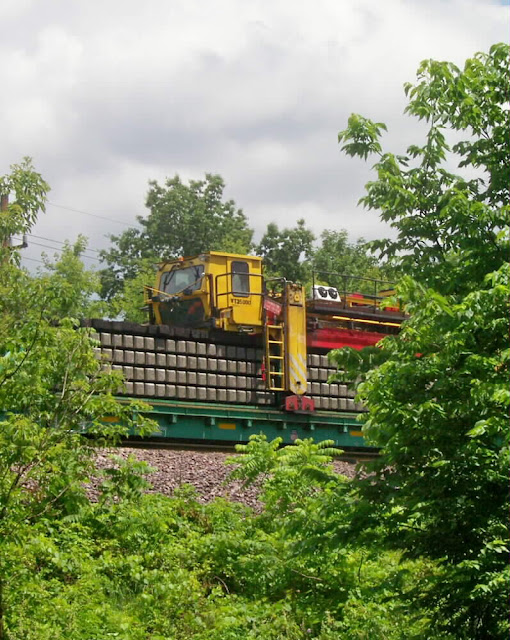 There are three such carriers, which hand off the concrete ties back to the track renewal car and then move the wood ties to spaces vacated on the flat cars. This is a non-trivial programming problem. The crane closest to the renewal car cannot stray too far lest that car run out of ties to lay, and the wood ties have to be removed expeditiously lest they obstruct access to the concrete ties underneath.

The guts of the operation is in the next picture. The rail to be installed is inside the existing tracks ahead of the train. It's guided up and over the existing rail. Just behind the fixtures that do this is a mechanical spike-puller operated by a worker in what looks like a belly gun turret under the renewal car. The rail that's been de-spiked then is guided up and out while the replacement rail is guided down and in. The new rail is below the old rail here, and note at the left of the photo that the new rail is being bent away from the camera and the old rail is being bent toward the camera. (Real rail is probably more flexible than model railroad flex-track. Look how far outboard of the tie ends it is.) The fittings have to hold the rail high enough to clear the old ties, which are scooped onto a conveyor by the wheel just to the right of the fitting holding the rails, and to clear the new ties, one of which is being deposited behind the tree at the left. (That part of the operation is invisible to a trackside observer as a plow clears a wide space in the track ballast once the old tie has been scooped out.) 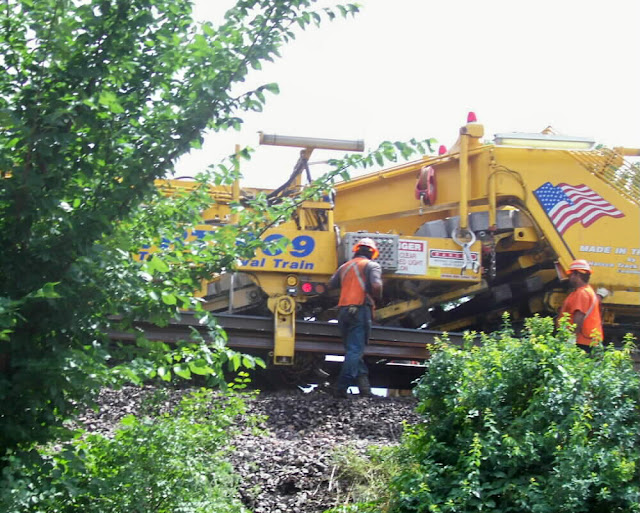 There are a number of other fittings on the renewal car that strip the rail anchors off the rail that's being removed and insert anchors and fasteners as the new rail meets the new ties. 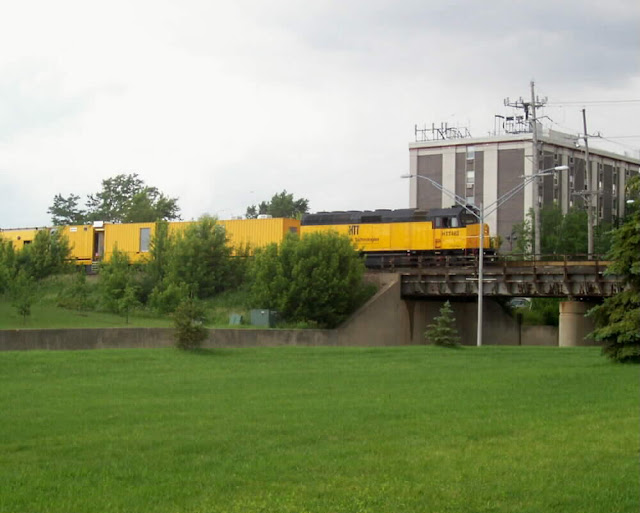 I took the picture of the tagged diesels from this location at about 1 pm. The traveling cranes were east of that location along the bike path. There was enough time to grab a coffee and wait for the main event to show up, and the entourage was west of the overpass at about 3 pm. That's the powerhouse (looks like ex-Amtrak) and the work-train office, complete with a small medical facility ahead of it.

The train is able to keep moving even with trains passing on the south track. 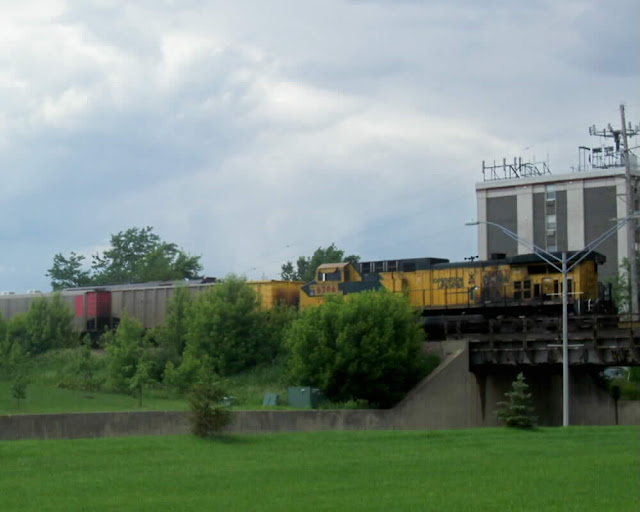 The "Operation Lifesaver" slogan is Chicago and North Western. The red cab number is Union Pacific.
Posted by Stephen Karlson at 22:55

Email ThisBlogThis!Share to TwitterShare to FacebookShare to Pinterest
Labels: ferroequinology