GETTING INTO THE PENNANT RACE. Monday night was Scout Night at Miller Park. Lots of Scouts parading around the field before the game. 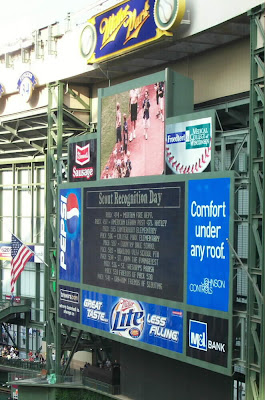 The Brewers won the game and continue to protect their lead over the Cubs.

There was a little excitement on the train ride home. A trucker hauling a concrete tube to a power plant work site had a shifting load that bashed the Highway 20 overpass.

The bridge remains open to railroad traffic, but trains — including the Amtrak trains running on that double-track line — will only be allowed to run at 10 miles per hour until railroad officials can figure out repairs, according to Sturtevant’s acting director of public safety, Capt. Sean Marschke.

The Amtrak trains, other than the Empire Builder, are either preparing to stop at the Sturtevant station or departing from it, which will not affect timekeeping too seriously. My train arrived in Chicago in plenty of time to make the connection to the next Elburn train out.

The bridge-bash gives me opportunity to speak of a Soviet invention I saw along the Trans-Siberian. There is a solidly anchored I-beam a few meters either side of the railroad overpasses which will create serious havoc with any out-of-gauge truck. Perhaps U.S. railroads ought consider such measures.
Posted by Stephen Karlson at 22:54