UPDATING THE RAIL DIESEL CAR. I have referred to the Virgin Voyagers, not entirely favorably, as a pale update of the New Haven Comet train. Although the Voyager uses airframe construction techniques (common in railcar construction these days) it has an engine under each car turning a power plant supplying the traction motors under each car. The more apt update is of a Rail Diesel Car but with a diesel-electric rather than a diesel-mechanical power plant on each unit. The New Haven Roger Williams train, specially modified Rail Diesel Cars configured with mock diesel noses on each end, might be the best comparison. The two nose units and a middle unit of the Roger Williams made it into preservation.

That correction noted, the Voyager, as seen here in Reading, still strikes me as ill-suited to long distance services. 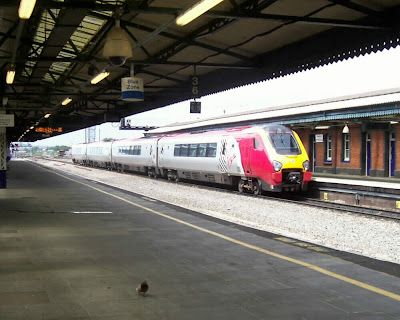 The First Great Western Adelante sets, which are the real provocation of the post, do give the impression of an updated Roger Williams, with the bulldog noses replaced by the curved noses favored on the more recent commuter train diesels, and the radiators recessed in the roof.

A unit is about to cross over to the fast line at Reading. 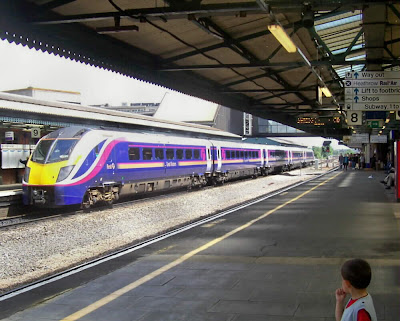 First Great Western use these units on the fast outer suburban service up from Oxford, and I had occasion to ride one to London. The seat spacing and baggage racks are spacious enough to do credit to a longer-distance train.

Such a unit, if it could meet North American strength standards, would be quite right for an outer suburban service from DeKalb to Chicago (calling at Elburn, Geneva, Wheaton, Elmhurst rather than Didcot, Reading, Slough at the same approximate distances) or for the Rockford to Chicago corridor. One wonders if it would take a $2 per gallon train tax on gasoline to make such projects possible. For comparison, a liter of gasoline was selling for 97 pence or so while I was in England.)
Posted by Stephen Karlson at 11:36