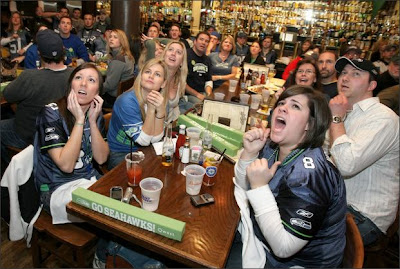 Seattle Post-Intelligencer photo by Joshua Trujillo (photo 6).
Seahawk coach Mike "I'm Too Busy Negotiating With Paul Allen To Prepare For The 'Niners" Holmgren takes some stick from the home fans.

Green Bay would've scored 50 points. Or maybe 60. Brett Favre would've been engaging in snowball fights the entire second half instead of during snippets of the fourth quarter. Seahawks coach Mike Holmgren would've sent his defensive players down Holmgren Way, the street here that honors him, to take down his signs.

Rarely should a team lose 42-20 and feel fortunate. But that's an appropriate sentiment considering how inexplicably absent the Seahawks were. At the end of another season that will go down as unsatisfying, the Seahawks finished with the worst defensive effort in the franchise's postseason history. And it's not like Seattle has the defensive tradition of, say, the Pittsburgh Steelers.

The bar was only ankle high, and the Seahawks stumbled over it with the clumsiness of a clown on skis. They gave up more points than they ever have in a playoff game. More rushing yards, too. They had never allowed more than four touchdowns in a postseason game. They surrendered four in the first half to Green Bay.

The early weather forecast for next Sunday in Green Bay will be a high of 7o(F). That's relevant, because the Packers will host the title game.

The Cowboys just wasted a 13-3 season, which matched the best in team history. They're the first No. 1 seed in the NFC to lose in this round since the NFL went to the 12-team playoff format in 1990. They also became the seventh team to lose a playoff game against a team they'd beaten twice in the regular season - joining Dallas' 1998 club.

Worst of all is the extension of all the skids: Romo now 0-2 in the playoffs, coach Wade Phillips 0-4 and the team 0-for-the-postseason since winning a wild-card game in 1996. The Cowboys have dropped five games since then.

The Cowboys first acquired a "choker" label losing title games to Vince Lombardi's Packers in the 1960s.
Posted by Stephen Karlson at 21:24