OUR FRIENDS ON THE SOUTH SIDE. The Chicago White Sox honored our fallen students along with members of the Sox organization who over the winter have made the final out. 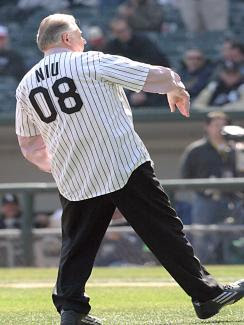 [Northern Illinois president John] Peters later joined the families of victims of the Feb. 14 shootings in a private suite to watch the game.

“[The families] are doing remarkably well, they are tremendously strong people,” Peters said. “Obviously, they have things to share with each other. They’re talking to each other about their experiences.”

The White Sox gave the families pinstriped jerseys with the last names printed on the back and the number “08,” as well as baseballs signed by Buehrle.

Each of the victims was honored during the pregame moment of silence, which has traditionally honored members of the White Sox family who have died.

On Monday, photos of Gayle Dubowski, Catalina Garcia, Julianna Gehant, Daniel Parmenter and Ryanne Mace accompanied those of former White Sox players and other former members of the organization who died in the last year.

“On the field, it was very emotional when the White Sox integrated our five students with their players that died in the last year,” Peters said.

I've identified my American League favorite for this year. No dilemma, as no interleague games between the Brewers and the White Sox this year.

Email ThisBlogThis!Share to TwitterShare to FacebookShare to Pinterest
Labels: baseball, Forever Together Forward