PAGING AMERICAN FLYER. The elder Walter Dorwin Teague, who design historians tend to recognize for his work on consumer goods and airliners, also worked with Pullman's Osgood Bradley division and the New Haven Railroad to design a fleet of streamlined passenger coaches that were on northeastern rails a little bit ahead of the Union Pacific's and Burlington's motor trains and well ahead of the Hiawatha (or the Coronation). The largest fleet was on New Haven, with Bangor and Aroostook and Boston and Maine also using the design. (A few railroads outside New England also bought such cars.)

The design allowed for easy tooling in a tin shop, with New Haven's A.C. Gilbert quickly turning out S (and later O-27) approximation of the cars, which may be the first time in ferroequinology that a fleet of prototype cars received a nickname based on a model. (Yes, American Flyer put names on incorrect cars: only Bangor and Aroostook had Teague baggage cars.)

I just received the 40th anniversary issue of Passenger Train Journal, which included an intriguing article on the Alaska Railroad's passenger trains, including an interior shot of what looked like an updated American Flyer car. The article mentioned some Pullman-design cars licensed to Daewoo. I did a bit more research and came up with some exterior shots. 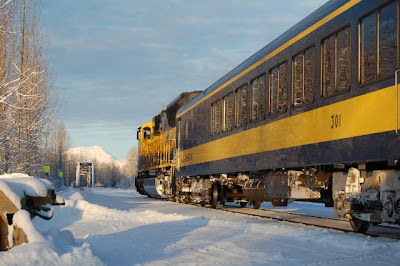 Going shot of a train Near Denali, from the Alaska Railroad gallery.
Here's a roster shot. 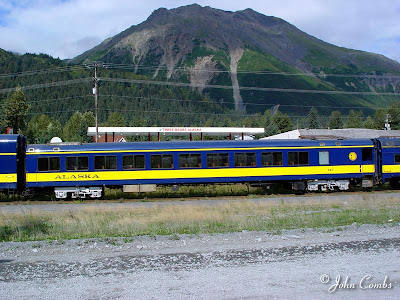 Alaska Rails image.
I suppose the roof had to be squared-off for manufacturing practicality. Now, if Amtrak ever had a proper capital budget, wouldn't a rake of these look good on the Downeasters or the Northeast Regionals? Heck, I wouldn't mind some being assigned to the Hiawathas and the Illinois service. The Passenger Train Journal article noted that Daewoo built the cars for Alaska in order to establish a presence in the North American rolling stock market.
Posted by Stephen Karlson at 23:49