FIFTY-FOUR-FORTY, NO FIGHT; THIRTY-SIX-THIRTY, BIG FIGHT. I suspect Peter the Great, who fought Livonians, Poles, and Swedes to secure his window to the West, would have appreciated How the States Got Their Shapes, which earns an enthusiastic Book Review No. 35 despite some of author Mark Stein's quirky asides about public policy.

Although many of the European powers had established colonies by 1650, the areas of North America that were actively supplying resources to their mother countries were small compared to the areas that the European powers had explored. The explorations suggested that those areas ought be claimed, and the claims backed up by force if necessary. Thus, this Encarta map shows the situation as of the mid-eighteenth century, by which time the British had tossed the Dutch out of North America and held temporary possession of Spanish Florida.

The outlines of the Mississippi Valley states are present along the river, which makes sense, and a natural frontier between continental powers provides a logical boundary between sovereign yet United States. (I suppose we should be grateful there's no Prussian colony in the Mississippi Valley, the thought of a country-and-western version of Wacht am Rhein boggles the mind!) But look west. The Russian territory looks something like Oregon and Washington. There's logic to that. The Russians and the Spanish implicity agreed to send their respective shipments westward through the Puget Sound and the San Francisco Bay watersheds, and when the British moved into Russian claims, their diplomats concluded agreements with Spain to divide at 42o N. Lat., today's California-Oregon border, and with Russia to divide at 54o 40' N. Lat., the southern tip of Alaska.

The British had designs for all of North America, which were evident in this British map from 1755. 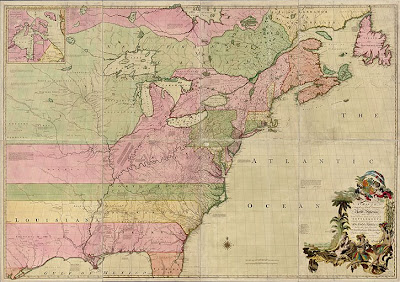 King Charles II set the boundary between Virginia and North Carolina at 36o 30' N. Lat., to give Virginia all of Chesapeake Bay and North Carolina all of Albemarle Sound, thereby permitting each colony to tax its own seaborne commerce. That boundary thus becomes the Kentucky-Tennessee state line, and it much later separates Missouri from Arkansas and figures in defining the Oklahoma and Texas panhandles. (For the Republic of Texas to annex itself to the United States as a slave state, it had to be south of 36o 30' N. Lat. under the still-in-force Missouri Compromise.) The map is somewhat less precise to the north, where Connecticut also claimed a Western Reserve all the way to the Mississippi, and where there were no islands east of Isle Royale (the British negotiator of the 1783 treaty didn't know that, but Benjamin Franklin did). Those colonial boundaries, however, existed to hem in the Puritans (a king named Charles would have good reason to do that) and to keep New Hampshirites from coveting Canada, particularly the recently conquered French Canada. Then came the War of Independence, which gave Vermont the opportunity to declare its independence from New York.

And thus thirteen colonies become thirteen states, with some of British North America ceded as the Northwest Territory. That boundary became 49o N. Lat. west of Lake of the Woods (and thus the closest thing to a U.S. enclave in Canada), a parallel that would ultimately be the international boundary to Puget Sound. The former colonies agreed to turn some of their claims to the territories into potential new states, which Congress expected to be a source of additional tax revenues (Mr Stein does not revisit that hypothesis in light of the Homestead Act) as well as of additional pro- or anti-slavery delegations in Congress.

East of the Mississippi River, Congress struck a balance between equalizing opportunities and simplifying governance; thus the Pennsylvania Corridor to Lake Erie (again, let us be grateful there were no German colonies) as well as lake access for Indiana, Illinois, and Minnesota. The promoters of the Illinois Territory obtained the northern border they did in order to be able to build canals to the Great Lakes, bounded by free states, rather than depend on shipping goods down the Mississippi River through slave states. Where boundaries deviate from rivers, these tend to follow parallels or meridians from locations beyond which the river no longer crosses that parallel or meridian, precluding isolated pieces of a state with inconvenient access for law enforcement. And, come the Civil War, the West Virginians, who tended to be mountaineers outvoted in the legislature by proxy-buying slaveholders (the perverse logic of the three-fifths compromise at work) used the inconvenience posed by Genl McClellan's first command to follow Vermont's example during the War of Independence and leave Virginia.

To the west, the principles still applied, although with more focus on equalizing outcome. King Charles's line ends with Oklahoma, and the panhandle using the 37th parallel permits three four-degree or four three-degree states from that parallel to the Canadian boundary. Congress also intended that states cover six or seven degrees of longitude, subject to administrative constraints (which included fencing in Mormons, no doubt to the amusement of the ghosts of King Charles II and King George II, separating the miners from the farmers, and keeping jurisdictions on the same bank of the river.) Only in Colorado and Wyoming did the other constraints not govern, permitting two states that look rectangular on a Mercator projection.

The exceptions to the Western grid pattern turn out to be only Texas and California, which were originally independent republics that sought membership (shall I say Anschluss?) in the Union without going through the steps from territorial status to statehood that Congress had set up.

The book was a treat to read, despite the author's occasional internally-inconsistent asides about public policy and the wisdom of Congress. That noted, I have two gripes. First, a bit more technical material would help in places. Consider the western border of Maine, which, rather than follow the 71st meridian north from the source of the Salmon Falls River, runs two degrees west of (magnetic?) north for 120 miles. Mr Stein explains (p. 123)

The problem with "just north" is that the earth is not flat. If this boundary were truly due north, its line would appear curved on a flat map. To compensate, boundaries were often stipulated as some few number of degrees east or west of north.

That curvature is an artifact of the projection being used. On a Mercator projection, a meridian bears true (rather than magnetic) north and it appears as a straight line. On other projections, straight lines pose challenges, particularly where variation of longitude is concerned.

My second gripe is with the organization of the book. Alphabetical order is traditional at political conventions, as well as convenient to the casual reader who will pick up the book and flip to his or her home state. It works less well for the serious reader, who is continually encountering reminders to consult "DON'T SKIP THIS" (a prologue explaining some but not all of the colonial treaties and Congressional compromises that gave the map its structure) or "For more details turn (forward or backward) to CONNECTICUT." A presentation of states in the order by which their territories were created would make more sense. It then becomes a matter of elimination how the Dakotas or Oklahoma or Arizona or for that matter Wisconsin come to be.

Posted by Stephen Karlson at 23:01