DIVISION OF LABOR. Last week, Alaska governor Sarah Palin pardoned a turkey at a turkey farm and then gave an interview that causes vapors at the Huffington Post, and scoffing elsewhere, with Armed Liberal unimpressed. Mark Steyn is saltier. Tim Blair kept track of reactions around the web. Power Line had the best comment.

Yes, it's quite a scandal in Liberal Land. Sarah Palin actually doesn't mind when turkeys are killed, almost in her very presence. Which is the rub, I suppose. Unlike the Governor, most liberals make sure they're somewhere else when animals are being slaughtered for food. 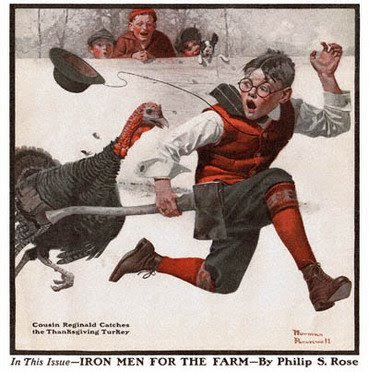 Sisu has more about the technology of turkey decapitation, if you're curious.

The wisecrack about Liberal Land, however, provokes a contrast between the economic way of thinking and what passes for thinking in the fever swamps of culture studies.

The butchering of turkeys is something that many of us, including Cousin Reginald, don't know how to do, and methods of animal slaughter, including the Cone of Turkey Death, might be messier because meatpackers are able to find people who will do the work for low wages. There's more on the topic in Eric Schlosser's Fast Food Nation, which I read some time ago, before I became involved in the Fifty Book Challenge. Mr Schlosser is no fan of the contemporary meatpacking business, and his work is in the tradition of Adam Smith's and Karl Marx's and Alfred Marshall's recognition of the downside of specialization and division of labor, captured most pungently in Marx's "appendage of a machine" and only slightly less colorfully by Marshall's "work of no elevating character."

Perhaps the Power Line post wishes to conjure up the image of the limousine liberal, quite content to eat meat that someone else has cut up, and per corollary, quite content to have other peoples' children attend the urban common schools.

That's not, however, the only possible source of the squeamishness Mr Steyn and Mr Blair had such fun with. Perhaps the Huffington Post writer has spent time in the fever swamps of cultural studies, in which the commercial butchering of animals becomes an example of the absent referent.

I was struggling to find a way to explain why people eat animals and why it is so difficult to discuss the issue. I realized that it was because of what I call the structure of the absent referent: Behind every meal of meat is an absence: the death of the animal whose place the meat takes. The "absent referent" is that which separates the meat eater from the animal and the animal from the end product. The function of the absent referent is to keep our "meat" separated from any idea that she or he was once an animal, to keep something from being seen as having been someone.

Never in the history of intellectual endeavour has so much effort been devoted by so many to so little. From that we get The Sexual Politics of Meat, which I skimmed one lazy afternoon years ago, to be unimpressed by its efforts to treat housewives preparing roasts for their husbands and deer hunting as manifestations of the same hierarchy of dominion, but the author saw fit to offer a sequel, The Pornography of Meat, and the late unlamented Lingua Franca suggested there would soon be a new library category, "patriarchy and meat." Sometimes the only thing to do is to snicker. Smith and Marx and Marshall got the essentials right. The rest is distraction.

Posted by Stephen Karlson at 23:08