TROLLEY SPARKS. The Milwaukee School of Engineering has a model railroad club with an HO walk-in layout in the student center. As part of Model Railroad Month, the club hosts an exhibition of other model railroads. The college has converted some of the old Blatz brewery into public space, including enough room for The Milwaukee Light Engineering Society to offer train rides. 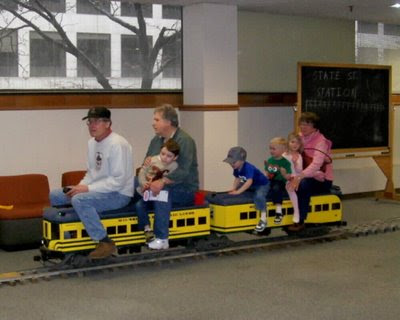 That's the second of the two trolley dining cars to come out of Cold Spring Shops. I'm informed that the association has a second duplex unit.

Across the street is another Turnverein (not to be confused with the still functioning Turnverein on Fourth Street that's better known for its fish fry than for its still-in-existence sport program). I must confess to some unfamiliarity with this part of Milwaukee despite having once lived there. The student center at Milwaukee School of Engineering includes a gallery of oil paintings of steel mills. A return trip is in order. 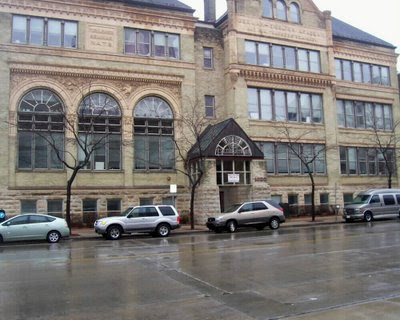 Sunday's weather was not conducive to driving, and it was making a mess of the airline schedules. I wonder if any of the people booked on that 8 am plane to Chicago got on the first train of the morning and took a cab from Glenview. (And what's up with the "closed" 7.12 to Montego Bay? I'm waiting for the 11.10 train.) The trains were warm, full, and close to time or on time. No logs, nap time. 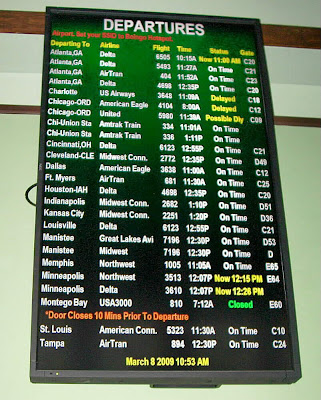 The Hiawatha service might not be as frequent or as fast as the Acela Express or the Neubaustrecke. It's one that observers on the coast, as well as European visitors, ought be aware of.

With very few exceptions, city-to-city travel in the US by rail is, if available at all, generally slow and inconvenient outside of the Northeast. Visitors from other countries are shocked, given the large number of trips that are within a 100-400-mile distance but for which travelers are generally forced to go by air or personal car.

We're making some changes in the Chicago area. The Milwaukee service, although lavish by Amtrak standards, is dramatically reduced compared to, say, 1949, with competing 75 or 80 minute expresses on The Milwaukee Road and Chicago and North Western, and hourly limiteds on The North Shore Line.
Posted by Stephen Karlson at 23:10