THE RETURN OF THE RED BALL FREIGHT. Today, I was reviewing some page proofs at the local Starbucks when a short rake of matching large ARMN refrigerator cars rolled westbound. The most recent issue of Trains told me what I was seeing: the return move of the Produce Railexpress, a dedicated service operated by Union Pacific, CSX, and Railex to move perishables, including peppers and wine, from two gathering terminals at Wallula, Washington and Delano, California to a distribution center near Rotterdam Junction, New York.

The train is allowed 70 mph where track conditions permit, mechanical refrigeration means no pauses at icing docks, and the absence of any enroute classification means times competitive with single-driver trucks at rates competitive with dual-driver trucks as well as less exposure of the lading to the shocks of switching. Cars can be added or dropped from the consists as originating traffic warrants, providing an advantage over the integral train.

The ARMN reporting marks are Union Pacific's version of what used to be American Refrigerator Transit, a joint venture of Missouri Pacific and Wabash with cars dedicated to moving vegetables and sides out of the breadbasket.

A string of identical white refrigerator cars, most of them heavily graffitied, doesn't have the charm of the old billboard reefers. 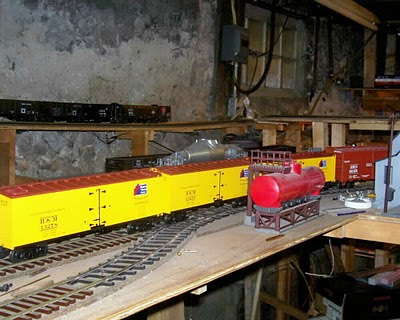 On the other hand, the old car-service rules involved a lot of empty car movement, as, for example, the Swift car bringing sides of meat to Gloucester had to return to Winona empty, while the NEFX car that loaded at Gorton to make sure the Legion posts in Wisconsin could have their fish fries might bring a load of window frames back to New England. And the switching and pauses to ice damaged the lading, and meant more inventory tied up in transit.
Posted by Stephen Karlson at 23:43

That's intersting about the trains and such...but...you were at Starbucks instead of The House!? Perhaps it's their use of fair trade coffee that appeals to you? *cough* corporate sell out *cough*

...I say this as I slowly sip my delicious cup of 'bucks. But then again, this area is severely lacking in local cafe choices.

It's closer to the office. The view of the tracks is better at the House. (I had promised the editor a quick turnaround on the proofs, which arrived while I was occupied with the search.)