THE ADVANTAGE OF A RETRACTABLE ROOF. Wednesday was a good day to disappear and take in two baseball games. 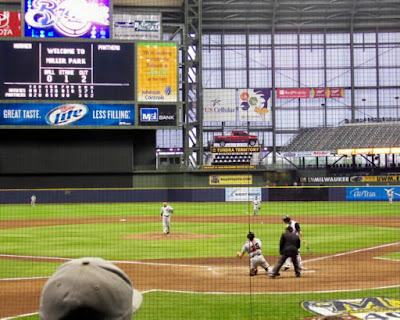 Just like another team with a shade of red before them did, the Northern Illinois Huskies defeated a Milwaukee baseball team under a closed roof at Miller Park Wednesday. With the help of back-to-back home runs in the fifth inning and a strong effort on the mound by Jake Hermsen, NIU took down the Milwaukee Panthers 5-3 at Miller Park, home of Major League Baseball's Milwaukee Brewers.

After watching the Atlanta Braves take a 9-2 noon contest over the Brewers, the Huskies (20-28) and Panthers (23-21) took the field 45 minutes later. In its third game in a professional stadium this season, NIU improved to 2-1 in pro parks with its first win in as many tries at Miller Park and second in as many attempts against the Panthers this season.

Alex Jones hit an inside-the-park home run and Jordin Hood followed with a get up, get up to the UWM bullpen. There were probably more Northern Illinois fans than UWM fans at the game. Although a UWM player also homered, Bernie Brewer was not available to slide for him.
Posted by Stephen Karlson at 23:49