THE SUBURBAN LINE ISN'T WHAT IT USED TO BE. Portland's Tri-Met operates several light rail lines, a commuter train, and something it calls a streetcar. There is an extensive free-ride zone downtown, and the system sells a day pass for $4.75. The car lines follow routes that aren't immediately obvious to me. I attempted to work in some of the system subject to the constraints of a 10:30 Talgo departure from Vancouver and a 6:15 return. (I subsequently learned that one of the rapid transit lines is almost within walking distance of the Red Lion, if one is up for a walk across a Columbia River bridge.) The lines cross downtown, where the cars operate on one-way streets. 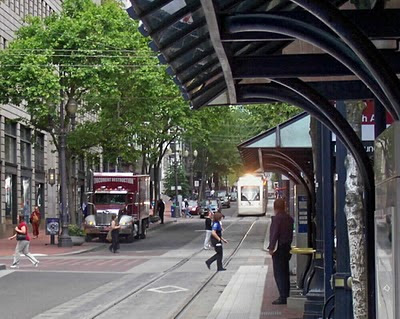 The system is slowly being expanded. On my return from Vic's Hobby Shop to the station, I followed a new track along Grand Avenue back to Holladay Street, in order to board a car in the free area. The new track crosses a buried old track at Halsey Street. Perhaps additional track will be unearthed? 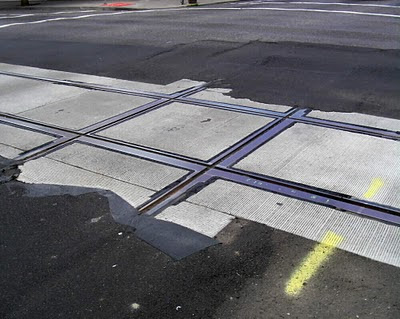 Most of my riding went north or east of downtown. There was a bit of a holdup at first, as all service was suspended owing to catenary troubles along Holladay. 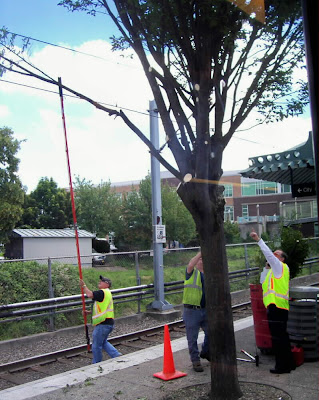 I hope that pruning hook has a fiberglass or wood handle.

I was looking for a classic suburban downtown and an opportunity to get some local food. (That's doable in Sharon Hill or Media, Pennsylvania, or Shaker Heights, Ohio.) It's different in Greater Portland. The Gresham line terminates at a large parking lot. The line to Clackamas Town Center terminates near a parking deck and a sizable shopping mall. (Come to think of it, a Pittsburgh line terminates near South Hills Mall.) Noodles provided the exotic meal. Pretty tasty and reasonably priced. 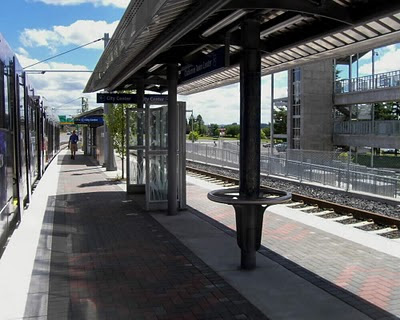 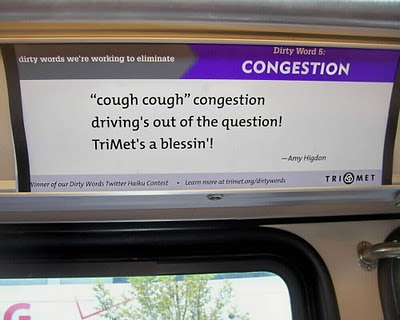 The light rail service is distinct from the streetcar. Streetcar stops are less elaborate. Here, the streetcar line passes through the center of Portland State University. It's more accessible than, say, the Chicago Transit Authority at Illinois-Chicago. 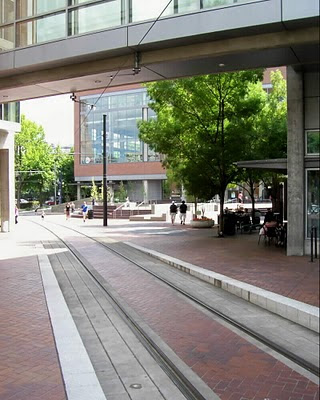 The streetcars are low-floor Skodas, successors to Boston's two rooms and a bath cars. 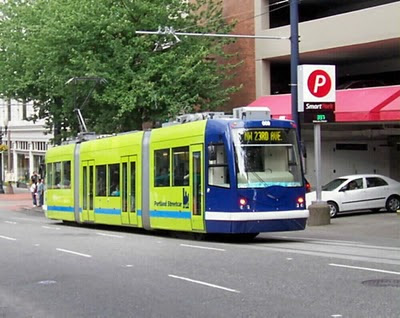 I had some time to explore both Vancouver and Portland away from the trains and the car lines. Here's a statue of Captain Vancouver, cartographer. 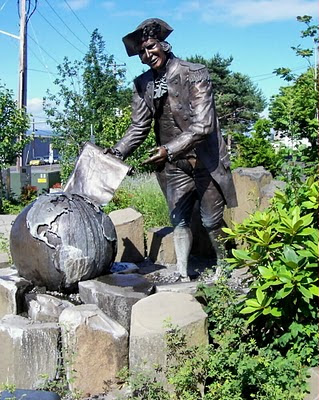 The Esther Short Park in central Vancouver has this simulated rapids for kids to play in. Some of the Portland parks also had watery play areas, a welcome change from decorative fountains and ponds where wading is discouraged or forbidden (are you listening, Chicago?) 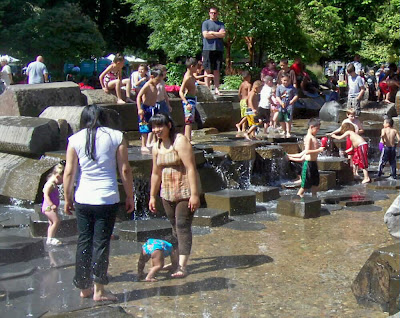 Portland has bubblers. I'm surprised that somebody hasn't raised a fuss about water splashing off people's dirty faces and back onto the bubbler head. 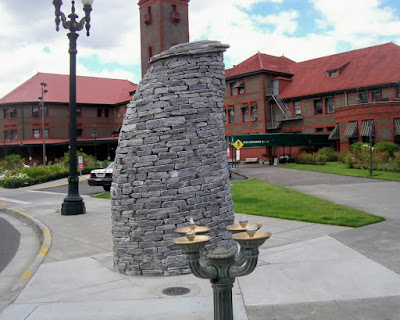 Portland's Union Station is well cared-for, it will feature in a subsequent installment.

Yes, there is blue-state smug, if you know where to look. Esther Short Park hosted a Recycled Art show, where this 1974 electric car was on display. 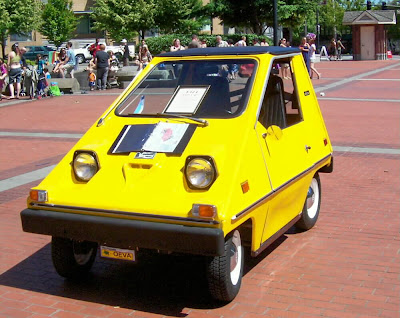 Ferroequinologists will remember that The Milwaukee Road turned its electrification off in 1974.

And Portland sees fit, for some reason, to brag on its public toilets. 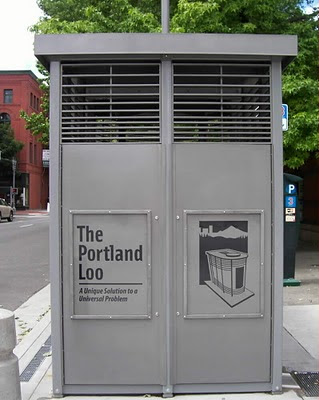 Whatever. The Red Lion on the Columbia is a good place to rest, and a Joe's Crab Shack and a Mexican themed tavern are also riverside, an easy walk from the hotel. More on the Talgo trains in the next installment.

(to be continued)
Posted by Stephen Karlson at 23:25