POWERED BY A TWIN MOTOR? Volkswagen are working on an electric Golf.

The transmission is a single speed, with an automatic-style shifter in the centre with conventional markings of Drive, Neutral, Park, Reverse and Brake, which dials in more regenerated braking energy. You can also use steering wheel paddles to slow the car by regenerating electricity in three progressive stages.

Like all electric cars where peak torque is available from zero revs, the Golf is quick away from the lights. Even with three adults on board, the motor's torque keeps it strong and responsive to the accelerator up to about 50 mph when the torque starts to tail off. This is a problem with single-speed electric motors, but as Tesla have found, sourcing a transmission to handle the getaway grunt is not easy. VW says it is working on it. Despite that drawback, the Golf will cruise happily at 75 mph and pulls gamely up to 90 to 100 mph. It's eerily silent and refined, much better than rivals that are much nearer production.

Perhaps the way to boost high-speed electric car performance is to stop thinking about drive trains the way manufacturers of internal-combustion cars do. 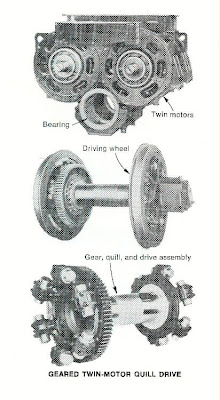 You're looking at the transaxle assembly, if you will, of a mid-twentieth century heavy electric locomotive. I scanned it from page 422 of the 1974 Kalmbach edition of When the Steam Railroads Electrified. The illustration does not identify the locomotive that uses this assembly: it could be from a Pennsylvania Railroad GG-1 or one of several large New Haven motors or possibly a Milwaukee Road Quill.

The quill design is one way of damping the shocks a wheel running on rough rail would otherwise inflict on the motor. The constant velocity joints of a front-wheel drive car must also allow each wheel to turn at a different speed when the car is in a turn.

There is no such thing as a forward-reverse transmission on a locomotive. To reverse the motor, the locomotive engineer simply reverses polarity. I should think that a solid-state technology sufficiently advanced to turn battery power into variable-frequency-polyphase pulses (which "a 176-pound AC synchronous (brush-less) electric motor driving the front wheels, powered by a 694-pound, 26.4kWh, 180-cell water/air-cooled lithium-ion battery" must imply) is a sufficiently advanced technology to reverse the order of the pulses, the way early constant-speed three-phase induction motor electric locomotives did. Disguising a reversing switch as a gear selector with the conventional P-R-N-D-B pattern strikes me as easy enough, and something that would raise the comfort level of the driver.

The two motors with an intermediate reduction gear "permitted higher motor speeds ... allowing the same power output with smaller motors." (When the Steam Railroads Electrified at 422) But why two motors? Because with two motors, maybe two 80 pound motors in the Golf, one gets the "getaway grunt" by connecting the motors in series (full amperage but half the voltage) and one gets the upper-end speed by connecting the motors in parallel (full voltage but half the amperage; owners of electric cars will note that the motors draw the most amperage at starting, with the draw decaying as the car accelerates) and augments the torque by reducing the back electromotive force in the motor field. In railroading we refer to those electrical configurations as series, parallel, and parallel-shunt, transitions among which can be achieved automatically.

Perhaps the electric car designers have considered the electric railroad approach and rejected it as unnecessarily complex. If not ...
Posted by Stephen Karlson at 20:46

Email ThisBlogThis!Share to TwitterShare to FacebookShare to Pinterest
Labels: technology