NOTHING SO INTRIGUING AS A LOST CAUSE. A few weeks ago, the sitemeter found a British weblogger who, in the course of asking if Britain scrapped steam too soon, pointed readers to a Cold Spring Shops post on the state of the steam art. There have been such discussions in the United States; in fact a Chesapeake and Ohio 4-8-4 was steamed to use on coal trains to develop performance targets for a new-style freight steam locomotive. (The subsequent implosion of OPEC made such projects less urgent, and the ability to trick an induction motor into seeing multiple frequencies took away some of steam's advantage in being able to move anything it started.)

The British discussion tends to focus on passenger power. It is true that the New York Central was unable to find much advantage in a pair of E-7 diesels over one of their super 4-8-4s. In North America, however, that's not the governing factor. No steam locomotive, not the Norfolk and Western A, neither the Union Pacific Challenger nor the Big Boy, not even the Boston and Maine R-1, could resist the power of four portholes. 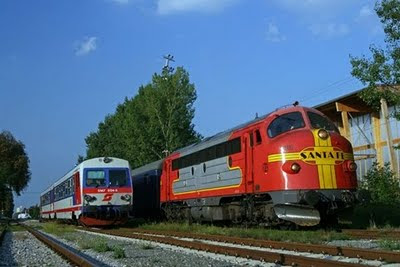 Raimund Whynal photograph courtesy Trains Online
The interesting counterfactual is, what if the British had asked Electro-Motive or Nohab to scale the F-7 down to fit their loading gauge?
Posted by Stephen Karlson at 22:45