IT'S A HARD-KNOCK LIFE.

Sons will converse with their fathers about life and work, and sometimes that makes its way into a family reunion booklet or genealogical research for the county historical society. If your name is Robert H. Gollmar, and your father is Fred C. Gollmar, you can claim My Father Owned a Circus, and supplement your income selling a few books, and the impresario of the 1:48 actual size Karlson Brothers Circus will ultimately write Book Review No. 30 about it.

The Gollmar brothers, cousins to the more famous Ringling Brothers, founded a wagon show in 1891, converted to a railroad show in 1903, sold the business in 1916, and subsequently leased the name to the American Circus Corporation, operator of the Hagenbeck-Wallace railroad show. 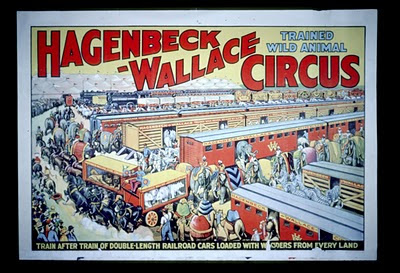 The book combines recollections of storms, train wrecks, accidents, corrupt public officials, and rumbles with hostile townies, referred to in circus lore as "Hey Rubes". There are some rosters of personnel, travel schedules, and playbills. It may not be the best book to recommend to somebody newly interested in the traditional railroad circus, as it's insider conversation, and Gollmar pere's recollections are supplemented with those of other circus personnel, who sometimes repeat stories told elsewhere. Tom Mix, Buck Jones, and Mamie Ward make appearances.

Somebody looking for additional background on what the railroad circus did and how it did it might also profitably read Joe McKennon's Logistics of the American Circus, which explains each department of the circus and the pecking order within the company. Keep in mind that the public zoological garden is a relatively new institution, and for many years the circus provided education in the form of exotic animals, with a menagerie tent set up between the main entrance and the side show, and lions or tigers along didn't necessarily mean a big cat act. But without the thundering herd of pachyderms, it's not a circus.

The Amazon listing for My Father Owned a Circus offers a few copies at collector prices. I'd best treat my copy, which came from a library de-accessioning sale a few years ago, as an asset.

(Cross-posted to 50 Book Challenge.)
Posted by Stephen Karlson at 23:41