SNOW ANGELS ON THE BLUE FIELD. December began inauspiciously for the Northern Illinois football program, with a hiccup in the Mid-American title game followed by the departure of the head coach to the Field of Broken Brett and Surrendered Axe. Never mind that, the Humanitarian Bowl ended well for Huskie Nation. 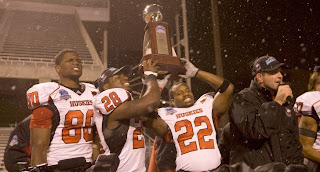 Northern Illinois University photograph.
Bowl games are supposed to be by day, in more temperate climes, but the players and some of the coaches took advantage of the snow that began accumulating after the gun to make those snow angels.
Posted by Stephen Karlson at 23:28