PUSHING THE LIMITS OF WISHFUL THINKING. There is a Fourth Turning section at Cold Spring Shops, and sensible thinking along generational lines occasionally gets its due. On the other hand, there's Tom Osenton's Boomer Destiny: Leading the U.S. through the Worst Crisis Since the Great Depression. Book Review No. 3 is not going to be complimentary. Imagine potted Strauss and Howe meeting Obama hagiography in the style of a business writer, with the intellectual coherence that suggests. 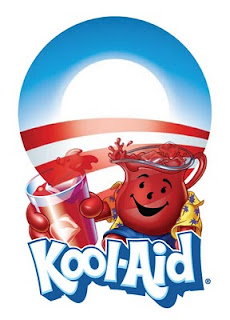 Mr Osenton suggests that President Obama, born in 1961, will be the late Baby Boomer that organizes the other Boomers to do the hard things to Save The Nation, in the same way that Franklin D. Roosevelt organized the Harvard Alumni Club Missionary Generation to ...  (Yes, I've heard the same sort of thing from Democratic Party cheerleaders and from academicians, some of whom should know better, but the former are to be understood for what they do and the latter sometimes marshal an argument with refutable propositions).

It's difficult to characterize President Obama as a Baby Boomer in the first place.  Depending on how you do your generational analysis, Mr Obama came of age after the transformative events of the Sixties and Seventies were finished, making him an early Thirteener.  Mr Osenton puts the transition between Boomers and Thirteeners at 1965.  But Mr. Obama's mixed ancestry, fascination with his Black Berry, and basketball skills are more representative of the Thirteeners.  Consider Jason Kidd as the less cerebral incarnation of Thirteeners.

Mr Osenton also blanks out the causes of the social transformation that blighted the lives of the younger Boomers and contributed to the canonical crudity of the Thirteeners.  Consider page 76.


The Gen X [Thirteener] Generation --born 1965 - 1984 -- is the first generation in American history with a greater than 50 percent chance of growing up in a household with a single parent or with both parents working in order to fund the pursuit of their American Dream.  Members of Gen X were also the first generation to experience daycare outside of the home in large numbers.  Whereas Boomers were raised by mom, Gen Xers were largely raised by someone else's mom.

Perhaps, long after the passions of the Sixties cool (which may take a century or so) there will be the dispassionate scholarly inquiry into the nature and causes of no-fault divorce, tax-supported child care, public assistance, and increased labor force participation by women.  The older Boomer reformers, abetted by Silent Generation technocrats, viewed the changed circumstances leading to Thirteeners' fractured lives as desirable.  Mr Osenton, however, blanks out their sources.  It continues on page 88.


During the Third Turning, it became increasingly necessary for both husband and wife to work outside of the home in order to maintain a relatively high standard of living.  The result for parents was less time available with their children and more time on the weekend needed for running the household errands and chores that didn't get done during the week because no one was home to do them.

He leaves out the shuttling of the children under custodial agreements, another bit of social science that has to wait for passions to cool.  But does it come as any surprise that if labor force participation by women increases, that dual income households will bid up the prices of the goods and services consumed by high-status households?  Particularly, if Corporate America and its employees agree on a job description and pay packet in which the large pay packet implies consent to 80 hour weeks ad infinitum, one of several productivity follies contemporary business indulges in.  Funnily, though, Mr Osenton, a marketing professional, doesn't see it.  From page 103, "Even the good folks at Kraft Foods decided to reduce the amount of milk used to make Cheese Singles in order to save a few bucks or make a few more bucks."  Perhaps the folks at Kraft used something called the 40/20/20 reengineering formula, in which it reduced the cheese division's budget by 40 percent, reserving 20 percent for new cheese division projects, and 20 percent for retained earnings or cost reductions.

That was the most instructive part of the book, as it might offer an explanation for shrinking academic departments (cut 40), retention intiatives or other faddish projects (reallocate 20), and administrative bloat (in higher education, there are no shareholders to placate) -- the trustees really are attempting to run universities as a business, never mind if the cheese isn't as tasty!

Implementing that model in government, however, is harder.  I've griped about Utopian Wonkery(TM) before, but to suggest that the national government undertake such an exercise as a way of solving the budget imbalance, with Congress putting all its customary practices aside for the duration of an emergency, because Nextel shows a fire department allocating budgets in thirty seconds, is a bit much, even for a business writer.

(Cross-posted to 50 Book Challenge.)
Posted by Stephen Karlson at 11:27