WHERE THE DECLINE SET IN.

A football game in a Dallas stadium, without cheerleaders?


Is a Super Bowl without cheerleaders -- at Cowboys Stadium, no less -- pure heresy?

One of the league's major marketing tools -- the sideline sex appeal of young women wearing revealing outfits and performing enticing dance routines -- will be on hiatus in Super Bowl XLV.

Teammate Antwaan Randle El, asked if he cared, replied, "Yeah, I care -- I'm glad they're not here. They are a distraction. If you look at the (giant screens), it's, "Oh, my Lord!' Especially in Dallas."

Let the record show that Super Bowls I and II were simply the AFL-NFL Championship game, both before the merger (the football merger, not Penn Central), both won by the Packers, and both before the counterculture wrecked The America that Worked(TM).

But perhaps it wasn't the counterculture's fault.  About the same time as the merger, the National Football League went much more Hollywood and the Dallas Cowboys began to shed their reputation as chokers and build their brand as America's Team.  The eye-candy on the sidelines, and the flamboyant players sometimes showing more interest in their own fame than in the success of the team were part of that effort.

That helped Dallas shed its reputation as the city where "they" (as author William Manchester put it) killed President Kennedy and threatened Adlai Stevenson (Jacqueline Kennedy expressed dismay that her husband was murdered by a "creepy little Commie") and turned it into a symbol of Sunbelt emergence.  The excesses of the noveaux riches that provided the script material for "Dallas" had their echo in life with Cowboy owner Jerry Jones firing underlings that dissatisfied him (the most recent being Wade Phillips, who had a bad day in Green Bay) in the best J. R. Ewing tradition. 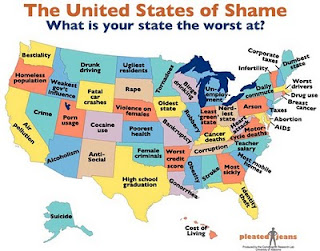 The diagram, from Voluntary Xchange, may be humorous, but apparently a lot of children are being left behind in Texas.  Get behind the news of the Packers using a high school practice facility, and note the players expressing doubts.


Highland Park's facility opened in August, and is comparable in quality to the one at [Texas Christian] that the Pittsburgh Steelers moved into Wednesday. Both buildings are NFL-caliber.

Such quality at TCU is one thing. But, a high school?

That's how it goes in Texas, especially the Dallas-Fort Worth area. There are megamillion prep palaces all around, with a $60 million outdoor stadium going up.
Highland Park is among the wealthiest suburbs in the nation, so the district could afford the pricetag on its facility. A $1 million donation from the booster club helped, too.

"That's ridiculous," Packers receiver James Jones said. "We barely had a football field at my high school in California. There's too much money out here. They need to send some of that extra cash out to California."

"We barely had grass," added defensive lineman Ryan Pickett, who grew up in Florida. "An indoor practice field? That's unreal."

Ultimately, I'd be more concerned if the creative money pulls out of Silicon Valley, but I'd be happier if somebody from Highland Park could send me a picture of the high school's planetarium, or its math team, or its space campers.
Posted by Stephen Karlson at 21:46