THE TRAINS WE RODE.  Greater Greater Washington notes the continued parlous state of Amtrak funding, offering readers a series of maps showing the intercity passenger train network over the past fifty years.  Start with the 1962 map. 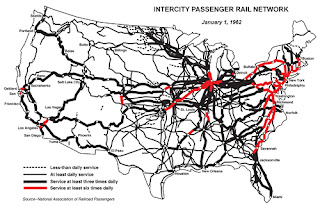 Train service to Chattanooga from the Great Lakes or from the east coast, multiple routes to New Orleans, the stub of the Olympian Hiawatha still serving Butte, Montana, the North Shore Line still offering hourly service between Chicago and Milwaukee, and look at that Twin Cities to Winnipeg corridor.

Fast Company (via Trains for America) have animated the maps, showing readers the Incredible Shrinking Intercity Train Network.  There are a few bright spots.  Los Angeles - San Diego is now a red line, and New Haven - Boston has been electrified and speeded up.

If I had the right kind of programming skills, perhaps I could put together a map of the evolution of commuter rail service since 1962.  Most of the big cities have seen extensions of their traditional commuter routes, with Chicago and North Western's Overland Route coming to Elburn, the old Soo Line becoming a commuter line almost to the Wisconsin border, and short extensions to other Chicago area routes opening in the past few years.  And a number of cities that never previously had commuter train service, including several in California and the trans-Mississippi region, now have them.

These lines do not yet connect, but that, too, is a possibility.
Posted by Stephen Karlson at 21:26