Think about passenger trains, and the images might well be the sleek “bullet trains” of Europe and the Acela trains used on Amtrak’s few high-speed routes in the northeastern United States.

The reality is much more modest: While America needs a high-speed rail network, most passenger trains for the foreseeable future will look much like they did 50 years ago.

The reality is more achievable than many people think.  Although Britain's InterCity 225 and the Eurostar and Western Europe's fifth-generation Electroliners and East Asia's various bullet trains get the attention, the reality for most train travellers in those countries is something more modest in comfort and performance, either for their entire journey, or for part of their journey. 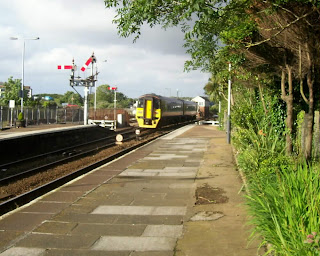 St. Erth, Cornwall, late June, 2007.
A passenger might be riding this puddle-jumper home from a day shopping in Penzance or relaxing at the coast in St. Ives, or using it as far as Plymouth to transfer to a faster train.  A London area commuter or a student at Oxford uses a faster, somewhat fancier Adelante, which, under the fancy paint is still a puddle-jumper. 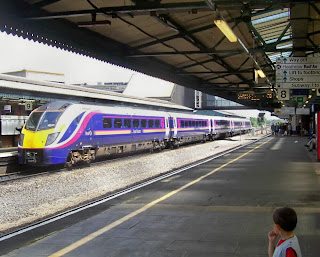 Reading, summer 2007.
By contrast, a Chicago-area commuter has a more substantial conveyance. 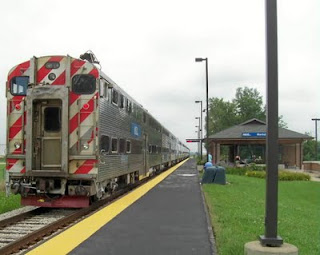 Manhattan, Illinois, end of July, 2010.
The picture suggests capacity any carrier outside North America or Russia would envy, although this is a Saturday train that will become comfortably full of White Sox fans before it arrives at Union Station.  To save money, Metra does not break up formations at weekends.  Despite the money woes, some of these coaches are lettered BURLINGTON in the lettering style made famous by the Zephyrs that could still put today's faster trains to shame.

All this illustration by way of addressing the next point in the editorial.


That’s because passenger rail in this country has to catch up compared with Europe and China. There, high-speed rail is a reality that is changing the way people live and improving the economies of those regions.

At the Press Club of Baton Rouge, a Union-Pacific railroad executive noted that passenger rail is now a subject of much discussion in the United States, but that implies considerable use of tracks now used for freight — also vital to the economy of this country.

“We want to make sure our customers are protected,” Robert W. Turner of the railroad said. “At the same time, if there are opportunities where we can work with passenger rail, we will.”

The freight railroads are making money, and devoting much of it to improving their tracks for heavier freight cars. Passenger trains on the same rails can interfere with the freight trains, although, as appears to be the case on the Chicago to St. Louis line, Union Pacific, Amtrak, and the Illinois Department of Transportation are putting together an expressway for passenger and intermodal trains.  Perhaps that project will divert some of the intermodal traffic off the Overland Route through DeKalb.  That expressway is the old Gulf Mobile and Ohio line, the last carrier operating trains from Chicago to St. Louis on the eve of Amtrak.  (Manhattan in the picture above is on the Wabash line that once featured a domeliner to St. Louis; at the end the City of Decatur didn't even connect at the ancestral home of the Chicago Bears with the Wabash Cannon Ball.  Illinois Central offered a service to Springfield up to April 30, 1971.)


For genuine high-speed rail, as that envisioned now in California, dedicated tracks will be required for the passenger trains that run at much higher speeds and have other requirements, Turner noted. “You have to have complete separation (because of speed differentials),” he said.

In Louisiana, revival of passenger service between Baton Rouge and New Orleans is a goal of business and political leaders in both cities. FutureBR, our city’s new master plan, envisions a $450 million project to launch service on existing tracks.

In 2009, Gov. Bobby Jindal’s administration said it would not pursue $300 million in federal funds to help launch the passenger rail service, saying it would be too costly to build and maintain.

Given the furor over Jindal’s opposition to the idea, it’s worth noting Turner’s comments. While the difficulties can be overcome, as they have in other states with passenger rail on regular tracks, the process of making passenger rail a reality requires careful planning.

Careful planning and more sensible promotion. A corridor service linking Baton Rouge to New Orleans has some potential. New Orleans as hub of a regional rail network, with multiple day trains to Montgomery and Memphis and Houston, probably more so, but the freight railroads in that part of the country have plenty of traffic, prolonged recession or not.

Joint ticketing between Amtrak and regional commuter rail operators and better connectivity have a lot of potential.
Posted by Stephen Karlson at 23:37