The Chicago Tribune suggests it is time to end agriculture subsidies.

The Popular Perspective on farm subsidies, often colored by a reading of The Grapes of Wrath or a "Ma and Pa Kettle" marathon, is that they exist to reassure us that somewhere, solid salt-of-the-earth types, or perhaps Norwegian bachelor farmers, are diligently bringing in the sheaves. 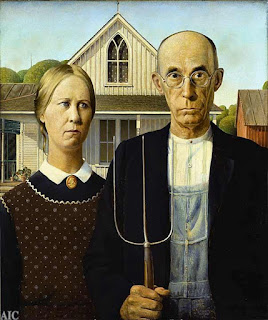 Although some subsidy money still goes to family farms, corporate farms, which are a small proportion of all farming enterprises, collect a somewhat larger share of total government spending on agriculture.


The problem goes beyond the indefensible direct payments—$4.7 billion a year in government checks sent to farmers no matter how much money they make. The problem extends to biofuel subsidies that promote corn-brewed ethanol at a cost of billions, conservation programs that pay lavishly to idle environmentally sensitive land and crop insurance benefits that farmers want greatly expanded.

Toss in those ethanol subsidies and other manifestations of corporate welfare, and Federal programs become a means to spreading the wealth around ... in an upward direction.


Since 1995, just 10 percent of the largest and wealthiest producers have taken home 74 percent of the subsidies, an Environmental Working Group database shows.

Do your own research ... the Farm (Subsidy) Belt includes Central Park West and North Lake Shore Drive and Telegraph Hill.
Posted by Stephen Karlson at 19:24