The news reaction is coming in to the debut of 110 mph trains across southwestern Michigan.  Sources suggest that trains are routinely running at these speeds, although a new schedule has not yet been issued.  With the slow running east of Dearborn and the inattentive dispatching of Norfolk Southern, perhaps the additional speed allows for recovery of some lost time, or of a cushion against delays west of Porter or east of Kalamazoo.

The Trains news wire recognizes that additional steps must follow.


“This is just the beginning,” said Joseph Szabo, the Federal Railroad Adminitrator. Szabo said work is under way to boost speeds on the Chicago-St. Louis line to 110 mph as well, using federal high speed rail grant money. “This is the first step in a buildout of a great system in the Midwest,” he said. “In the next three years you’ll see 80 percent of the Chicago-Detroit line and 80 percent of Chicago-St. Louis at speeds of 110 mph.”

Wisconsin, we're waiting to hear from you.

The same article quotes the director of Michigan's department of transportation, Kirk Steudle, who correctly identifies the value of a train.


Michigan’s Steudle said this incremental approach was the right way to go. “Economic development is huge along this corridor. A 200-mph bullet train would have meant you’re going to bypass all of these communities and there’s no way they could benefit. This makes more sense for us.” The state expects to complete its purchase of the Kalamazoo-Dearborn, Mich., portion of the corridor from Norfolk Southern by the middle of this year, which will pave the way for track and signal upgrades east of Kalamazoo.

Reliability is more important than rapidity, which the state seeks to remedy by purchasing the former Michigan Central to Dearborn, and the value of a train ... any train ... is in its ability to make intermediate stops that don't involve the time costs implied by "holding pattern," "boarding process," and "in line for takeoff." (The air carriers well might be happy to be shy of some of the shorter hops that now exist for lack of train service.)  Now can Amtrak and Metra coordinate their schedules in order that Huskies Fans might be able to take in a game at Western Michigan or Eastern Michigan and celebrate in the lounge car?


When the Pioneer Zephyr — better known as the Silver Streak — made its historic run from Denver to Chicago in 1934, the diesel-powered passenger train now on display at the Museum of Science and Industry topped out at 112.5 miles per hour, which at the time was only slightly off the world land speed record.

What then are we to make of Wednesday’s official Amtrak kickoff for its first “high speed rail” corridor outside the Northeast — on which trains traveling between Chicago and Kalamazoo, Mich., will now reach top speeds of 110 miles per hour?

Bring back the Silver Streak?

That 112.5 is a reference to a claimed New York Central record kept alive by the Museum of Science and Industry, which is current owner of a locomotive that allegedly reached that speed in 1893.  The first steam locomotive to achieve that speed is Milwaukee's Two-Spot, on May 15, 1935.  Regular readers will understand, however, why the "Bring Back the Silver Streak?" appeals. 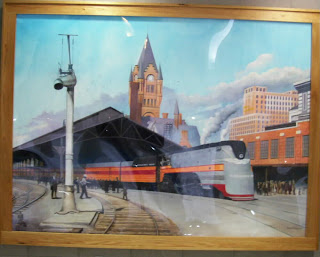 The report also makes a point about the high incremental cost and low incremental benefit of additional speed.


As the train reached its top speed, Amtrak spokesman Marc Magliari relayed speedometer readings from the engineer in a manner reminiscent of the scene from “The Right Stuff” when Chuck Yeager breaks the sound barrier.

Surprising to me, though, the 110-mph speeds take only 10 minutes off the one-way trip, officials said.

That’s because trains on the route were already going as fast as 95 mph before the most recent improvements that involved installing a high-tech train control system.

Also, the top speed is permitted across only 80 of the 138-mile distance. The slowest portions are between here and Porter, Ind., where the 97-mile “high speed” corridor begins — and then almost immediately slows as it passes through Michigan City.

The longest continuous stretch of 110-mph rail goes for 42 miles through Michigan, which you can cover in 23 minutes at that speed — a good way to put an expanse of snowy Michigan farmland behind you in a hurry, I can now attest.

I'm not in the mood to go into rectangular hyperbolas and asymptotes this late on Thursday evening. Note, though, that a German style Neubaustrecke between Porter and Kalamazoo knocks only another ten minutes off of that stretch, less if there's a stop at one end or both.  That's a lot of money for relatively little payoff.  The existing trains, running to schedule, beat the drive time and they have lots of electrical outlets for computers (something that wasn't true in 1984-1985, when I got some looks snagging the seat near the vacuum cleaner power supply and firing up my Model 100.)  Additional frequencies ... here's where the Acela and the Empire Service excel ... have greater value than the next increment of speed.

Several television stations had crews on the test train.  Here's a report from WGN.
Posted by Stephen Karlson at 23:56

"That’s because trains on the route were already going as fast as 95 mph before the most recent improvements that involved installing a high-tech train control system."

I thought the requirement for Automatic Train Stop or equivalent kicked in at 70mph. Was I confused?

Under Interstate Commerce Commission regulations continued by the Federal Railroad Administration, passenger trains cannot exceed 59 mph on unsignalled track (that's the old rule, there may be a stricter version now). On track protected by automatic block signals, the maximum is 79 mph. The presence of Automatic Train Stop and cab signalling permits higher speeds, there are some new requirements for track structure as well. Kalamazoo to Porter has had cab signalling and train stop for years, thus 95 mph running has been common since late 1999 or thereabouts. The "high-tech" the article refers to is positive train control, which includes Global Positioning features such that no train can get too close to another train without a brake application. That signalling permits closer train spacing than the old automatic train control the Chicago and North Western had, in which no train could enter a track circuit too close to another train without a brake application.

Thanks. Didn't realize that any of the positive train control / GPS systems were operational yet in this country.

Another potential issue with the Lightspeed system.

There's been some kind of enhanced signalling on the east end of the New Haven since 2000, when the Acela Expresses started running. (A substation operator who can pull a large knife switch and de-energize the catenary isn't enough of a safeguard.)

Union Pacific has been testing another version on the Alton Route between Dwight and Pontiac for the past four years or so (test trains have been going 110, although no revenue trains have). Amtrak's Michigan line uses something else, from General Electric. I'm waiting for the next issue of Railway Age, er, Trains, where there might be a clarification.

I was in Madrid a year ago and took the AVE from Madrid to Valencia. It was fun sitting back in the car and seeing a digital speedometer at the end of the car zoom up to 300 km/hr on several long stretches. It would be so amazing to have something like that here in the midwest.

Yes, those digital speed displays are fun. One version of the German ICE trains even has a first-class lounge with a view into the motorman's compartment.

Spanish-style speeds have their appeal, but I'd be happy to have this view of the tracks ahead and the speedometer, topping out at 90.