Lynne Kiesling summons the all-stars to point out the Errors of the Technocratic State.


Yes. Hayek’s Pretence of Knowledge meets Smith’s “man of system”, Tullock’s rent seeking, and Olson’s concentrated benefits and diffuse costs. Regulatory complexity creates benefits for politically-powerful special interests, but it creates costs for everyone else, and this ongoing process feeds the egos of our elected representatives who believe they can engineer, design, and manipulate society to achieve their desired outcomes.

It's an approving reaction to an Economist editorial suggesting that process-worship stifles initiative and preempts creativity.  The editorial, however, starts with an illustration of regulatory overreach that isn't as absurd as it seems.


The Federal Railroad Administration insists that all trains must be painted with an “F” at the front, so you can tell which end is which. Bureaucratic busybodies in Bethesda, Maryland, have shut down children’s lemonade stands because the enterprising young moppets did not have trading licences.

I'll let University Diaries deal with Bethesda lemonade stands.  The front end of a locomotive is not always as obvious as the wiseacres would have you believe.  Nobody sets up road-switcher diesels to run long-hood-first any more, which induces a lot of people to generalize from their own experience.  But it's not required that a locomotive have only one cab.

Here's Amtrak's 604, a General Electric E60C.  The wheel closest to the camera is therefore wheel R1, and you count back to wheel R6 under the fireman's seat in the second cab.  That's right, dear reader, second cab.  It's common practice on electric locomotives to have a control stand at each end.

In this more recent picture, we are looking at the non-front end of Amtrak 925.  Sure looks like a headlight turned on in anticipation of a move.  There's no evidence of a train behind, so let's keep looking. 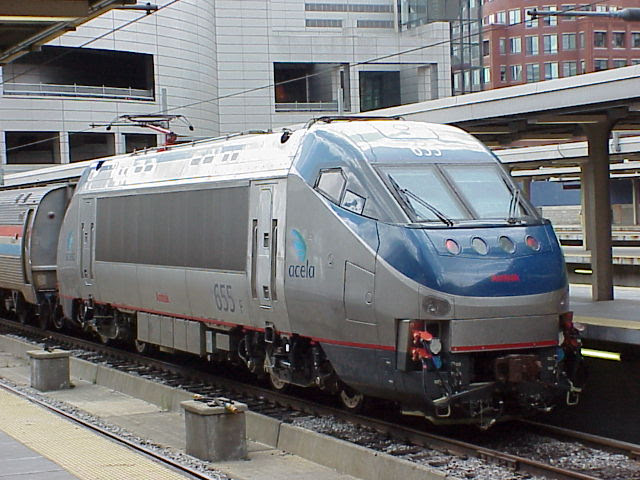 Here's Amtrak 655 on the head end of an Acela Regional train at Boston's South Station.  The wheel closest to the camera is wheel L4, in the event of sticking brakes or some other defect.  A locomotive leading a train, but the front end of the locomotive is trailing.

So where did the convention of using F originate?  It was in use on The Pennsylvania Railroad as early as 1964, in which the F end of a GG-1 is the end that houses the steam generator.  The Federal Railroad Administration codified the use of the letter F on double-ended locomotives and multiple-unit cars to refer to the end that held the electrical cabinet.  The notation is also useful on cabless locomotives (a few of which are still in use) so as to provide a reference for locating the electrical cabinet or the alternator.

It's amusing that Union Pacific suggested that the Federal Railroad Administration abolish the F requirement.

That's a one-off 4500 hp gas-turbine-electric locomotive with two cabs.  Perhaps Union Pacific is cold-turkey on double-ended locomotives after its experience with the unit shown above, but should it ever electrify and use double-ended motors, the shop crews will appreciate some help locating the electrical cabinet.

The reader might find other parts of 49 CFR 229 more instructive.  The language on designating a front end of a locomotive is straightforward.  The language covering onboard toilets and train horns is bureaucratic in the extreme.