A Chicago Tribune feature on Duneland describes the South Shore Line as the dunes country choo-choo.


While most motorists are accustomed to sharing the road with bicycles, few have ever had the odd experience of sharing the street with a train. In only a smattering of American towns do the train tracks run right down the main drag. In even fewer do suitcase-toting folks board a passenger train as automobile drivers wait patiently alongside.

Yet in Michigan City, the strange sight of trains stopping for traffic signals beside motorists is an everyday occurrence as the rail cars of the historic South Shore Line travel between Chicago and its eastern terminus at the airport in South Bend.

The article suggests that readers disembark at Beverly Shores for Dune Park. 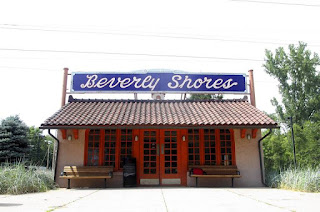 In addition to Dune Park, there are five prototype houses built for the 1933 Century of Progress whose owners allow an architectural tour, once a year in October.

I suppose that if journalists stop using steam-era descriptions of trains by, oh, 2061, that, too, will be a century of progress.
Posted by Stephen Karlson at 09:53