The latest phony controversy to sully the presidential race involves $700bn that has supposedly been taken from Medicare as part of the health care reform.  Several weblogs, scattered around the political spectrum, have recommended a Washington Post analysis as the best explanation of the missing money, if any.


The whole idea of Medicare Advantage was to drive down the cost of health insurance for the elderly as private insurance companies competing for seniors’ business.

That’s not what happened. By 2010, the average Medicare Advantage per-patient cost was 117 percent of regular fee-for-service. The Affordable Care Act gives those private plans a haircut and tethers reimbursement levels to the quality of care administered, and patient satisfaction.

I'm troubled by the casual use of the term "cost".  There is no such thing as price discovery in medical care, and insurance reimbursement rates are probably not even noisy signals of marginal cost.  Case in point: a recent statement I received from my insurer.  Provider sent insurer a bill for $253.  I am unlikely to receive a detailed statement of the services and supplies that add up to $253, as the insurer will pick up the full discounted rate of $152.46 for these services.  A subsequent statement for some additional lab work had a larger initial bill, and a proportionately larger discount.  I don't know if there's a standard discount for all insurance reimbursements, or a different billing rate for insured patients, or if a cash-paying patient would have to pay $253, or whether cash on the counter gets the same service for $100.

With that in mind, the pie chart illustrating the supposed cost reductions the health care will provide, with no loss in benefits to Medicare recipients, might be as promising as the sideshow's offer of a horse with his head where his tail should be. 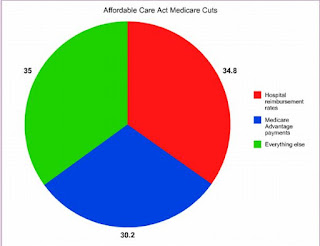 Apparently, the government wishing that hospitals and clinics accept a greater discount, or requesting hospitals and clinics to lower their usual and customary charges, is by some magic transmuted into lower outlays for taxpayers.  Whether fees rise for cash patients or for participants, if any remain, in private insurance plans, is apparently for another day.

A Bloomberg analysis illustrates the challenges in evaluating the competing policy proposals.


Another way the Affordable Care Act lowers the Medicare budget is by trimming payments to private insurers’ Medicare Advantage plans, which are generally more expensive than Medicare’s because they lack its negotiating leverage. About a quarter of beneficiaries belong to Advantage plans, and they are billing the government 107 percent of the cost of traditional Medicare -- a 7 percent bonus. By eliminating the extra payments, the health-care-reform law saves $156 billion (out of the $716 billion).

Because Ryan’s premium-support idea builds off the Advantage concept, there’s reason to wonder whether it would actually save money. We just don’t know; the Congressional Budget Office says the plan is so complicated it can’t tell, though reduced access to care could result.

Democrats and Republicans agree on this much: Medicare must be put on a diet. Both Obama and Ryan would cap annual spending growth at gross domestic product plus 0.5 percent. From there, it’s easy to see how the Affordable Care Act and premium support might work hand-in-hand. If Obama’s law can push doctors to provide more effective care, track patient progress better, use less expensive technology and coordinate with one another more, then consumers could have more control over their own spending, so premium support would have a better chance of working.

Adverse selection and information asymmetries are undoubtedly present in markets for medical care, and yet the insurers and advisory boards strike me as imperfect, and possibly worse, replacements for price discovery.
Posted by Stephen Karlson at 20:51