[Wisconsin linebacker Mike] Taylor and the other seniors will leave knowing UW (6-2, 3-1 Big Ten Conference) extended its streak to nine consecutive victories over the Gophers (4-3, 0-3), matching the longest winning streak by either side in the rivalry that began in 1890 and includes 122 games.

Wisconsin crossed Minnesota up with a new formation. I was not able to watch the game, but heard commentators after the game saying you could see surprise in a football team.


[Wisconsin] unveiled "The Barge" on its second series with the game scoreless.

[Tailback James] White gained 8 yards to the Minnesota 14 and then scored around right end on the next play to help UW take a 7-0 lead with 9 minutes 21 seconds left in the opening quarter. He added runs of 2, 4 and 4 yards in "The Barge" on a second-half touchdown drive.

And thus the Axe remains in friendly hands. 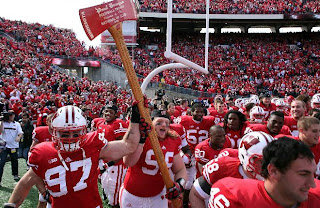 The string of posts keeping track of the Axe gets longer and longer.

Posted by Stephen Karlson at 23:38