A few people did turn out for an Illinois Department of Transportation public forum on the forthcoming restoration of Passenger Rail service to the Quad Cities.


Railroad representatives nearly outnumbered interested residents during an open house hosted by the Illinois Department of Transportation regarding additional Amtrak service from Chicago to the Quad Cities on Wednesday.

That characterization seems gratuitously pejorative. Most of the seats were occupied for the 4.30 pm presentation. The representatives made additional presentations at 5.30 and 6.30. 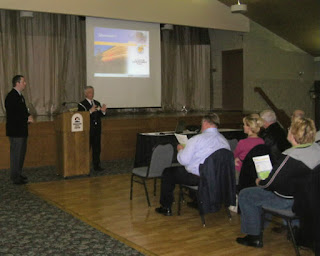 The trains were originally to be running sometime in 2014, although indecision among Iowa politicians has an Illinois-only service expected to commence in 2015.


The $222 million project, funded in part by $45 million from the state of Illinois, is set to begin construction in spring 2014, and [Illinois Department of Transporation project manager Todd] Popish said the state is ready to sign a contract for new bi-level railcars with the Rochelle manufacturing plant, Nippon-Sharyo. The bulk of the funding is from the federal government.

The sun sets over Illinois's Lake Mendota, behind the list of project objectives. 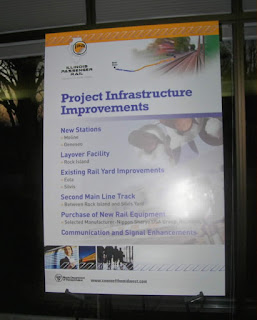 The coaches to be used will be part of a larger purchase by Illinois, Michigan, and California of cars similar to the current California Corridor cars.  (I still think a string of these cars, or at least the business class and cafe cars, ought to be named after Greek and Roman gods and goddesses.) 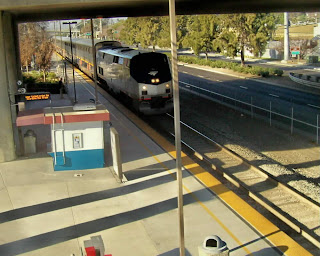 I did raise the question of connectivity between the two west Illinois lines.  Because the Quad Cities service will have a morning and afternoon departure each way, a passenger headed from Rock Island or Geneseo to Galesburg or Macomb or the other way should have the opportunity to connect at Princeton without a long wait.  Mr Popish did mention the importance of frequency to connectivity, citing the Milwaukee line.  Thus, somebody headed from Davenport to Battle Creek or Geneseo to Champaign probably still has to contemplate a few hours in Chicago.


The track needs to be upgraded along what is now the Iowa Interstate System from just west of Wyanet to the Quad Cities. The construction includes improvements to rail yards, a layover, two new stations and improved signaling and communication.

One of the attractive features of the Quad Cities line is that it uses the existing passenger-heavy Way of the Zephyrs between Chicago and a junction to be built near Wyanet. 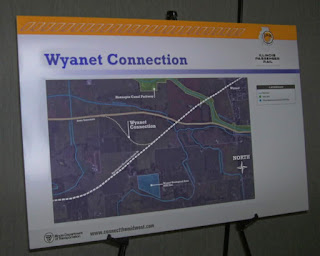 That green band at upper right of the map is the Hennepin Canal recreational area, adaptive reuse of an Illinois River to the Mississippi short-cut that was never big enough for the barges that emerged.

West of Wyanet, the Rock Island Line is remarkably straight until it gets into the Rock River valley where it joins the Mississippi River. 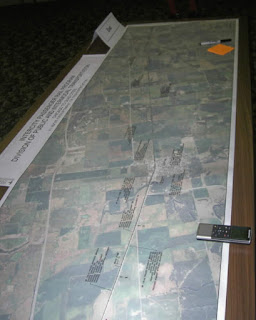 Somebody is recording the proceedings.  The small print describes the road crossing protection and planned improvements, if any.  The sticky notes are for residents who might wish to comment on the plan to make a comment.  The railroad is a tangent from the Wyanet junction to a curve through Sheffield, not planned to be a stop, and another tangent practically to the east limits of Silvis.


When complete, the new line will reach top speeds of 79 mph, short of the high-speed rail proposed for the Chicago to St. Louis corridor. John Schwalbach, an engineer with IDOT’s contractor URS, said the IAIS can only support top speeds of 40 mph now and upgrading beyond 79 mph would be a billion-dollar project.

Initiating service at 79 (mph) is a good step,” Schwalbach said. “It gives us an opportunity to gauge the interest level. High speed is great, but let’s get some predictable schedules going.”

That answer arose in response to a citizen question about getting the 110 mph speeds. The full response to that question included the encouraging observation that none of the planned improvements to the Rock Island Line would preclude future upgrading to 110 mph track. Mr Schwalbach is correct, though, that having dependable schedules and connectivity come first.
Posted by Stephen Karlson at 21:01