The annual O Scale West gathering took place in Santa Clara last weekend.  The purpose of a swap meet is to bring your stuff and take somebody else's stuff home.  Organizers recognize that some participants might not have enough stuff to justify hiring a table and sitting at it for the better part of a day, and there's this table to leave a few items for possible purchase by others. 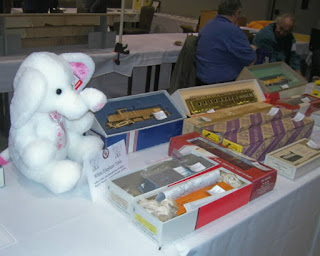 I made no purchase at this table.  But I did come home with a string of freight cars and a road-switcher to pull them.

Model railroading is supposed to be fun. 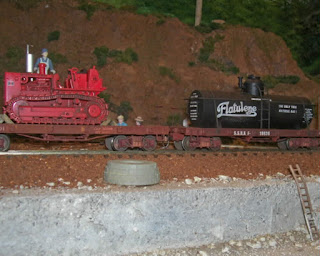 The swap meet takes place at the Hyatt hotel on the corner of Great America and Tasman.  Nearby, the 'Niners are building the third iteration of Kezar Stadium in the Lambeau Field era.   There is no rapid transit service to Lambeau, but there will be a trolley to the game. 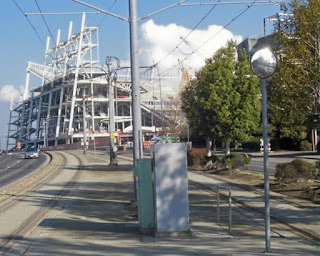 We have it on good authority that the Harbaugh brothers have an uncle who is an avid O Scaler.

The assembly area for construction of the stadium is using part of the Great America amusement park's parking lot. 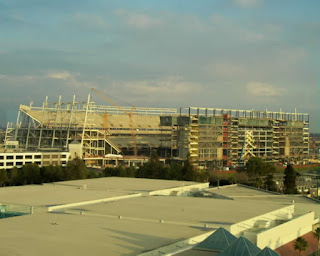 Silicon Valley is far enough north that the amusement park closes for the winter, or for what passes as winter (the conditions were warmish for late January, although the high temperature in Chicago on 29 January exceeded the high temperature for Santa Clara.)  The beginning of football season overlaps with the end of the summer high season for amusement parks.  Along Great America Boulevard, office towers encroach on the perimeter of the park.  At some time, the management is going to remember what opportunity cost is.
Posted by Stephen Karlson at 20:22