The best and the brightest are still off course.  Daniel J. Mitchell (via Insta Pundit) is not taken in by the supposed good economic news.


As this chart indicates, the White House promised that the unemployment rate today would be almost down to 5 percent if we enacted the so-called stimulus back in 2009. Instead, the new numbers show that the jobless rate is 7.9 – almost 3.0 percentage points higher. 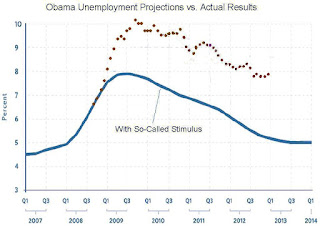 The unemployment rate falls as the labor force participation rate continues to shrink.


[The number of people not in the workforce] now stands at a staggering 89 million, up from 80.5 million when President Obama took office.

This means that there are currently 8.5 million more Americans not in the labor force than just four years ago.

Forget all the other numbers.

This continued explosion of people not in the labor force should be tremendously concerning as it represents an obstacle for the government to ever balance the budget without drastically raising taxes on those still working.

The statement from the Commissioner of Labor Statistics describes what an adversarial press corps would describe as a jobless recovery, with a substantial share of the new jobs being McJobs.


Nonfarm payroll employment increased by 157,000 in January, and the unemployment rate was essentially unchanged at 7.9 percent. In 2012, job gains averaged 181,000 per month. In January, employment rose in retail trade, construction, health care, and wholesale trade but edged down in transportation and warehousing.

As I prepare this post, I'm encouraged to hear Democratic toady Ed Schultz prepare to interview Vermont's Senator Sanders on the persistence of income inequality, despite the non-recovery recovery. I do not expect the conversation to turn to the importance of developing cultural capital or bourgeois habits.
Posted by Stephen Karlson at 19:19