That's what Northwestern likes to claim in its radio spots.  Never mind that Iowa and Wisconsin draw bigger crowds for their away games with Northern Illinois at Soldier Field.

But Northwestern and Northern Illinois have agreed to a game at Dyche Stadium, er, whatever they sold the naming rights to, in Evanston.


With Northwestern not in session that early in September, [current Northwestern and former Northern Illinois athletics director Jim] Phillips needs to fill seats and sell tickets. Recent NU nonconference opponents such as Towson, South Dakota, Maine or Rice didn’t draw or excite North Shore fandom as the Huskies should. Sure, in some ways, it’s a risk bringing in an up-and-coming local mid-major with seven bowl appearances in the past 10 years. Give Phillips and coach Pat Fitzgerald credit.

For NIU, so was scheduling FCS Eastern Illinois. Look what happened. Classic comeback victory before a sellout crowd at Huskie Stadium. What better advertisement for NIU football?

“Declining attendance at college football games is a national trend and scheduling has been identified as a prime factor in the decline,” he said in NIU’s announcement release.

Some of that declining attendance might be a consequence of the power conferences buying wins from weaker programs, or from a surfeit of conference games destroying traditional rivalries such as Notre Dame - Michigan.  Or it might be the annoyance of not being able to plan your weekend until Thursday, when the networks announce their television lineup for the weekend.  Or it might be weeknight football.

The announcement, however, gave the Chicago Tribune's "Main Event" an opportunity. 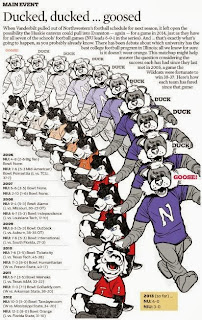 Posted by Stephen Karlson at 22:32