Some years ago, I suggested a photo study of the Hennepin Canal might be forthcoming.


This canal was an early application of concrete casting technologies later applied on the Panama Canal. Unfortunately, the Hennepin was built bigger than the old Illinois and Michigan canal and smaller than the Mississippi or Illinois River locks, rendering it uneconomic. It's a good linear park, with a towpath suitable for hiking or leisurely bike riding.

For almost as long, the Iowa Interstate Railroad's steam locomotives have eluded me.

Sometimes, though, everything comes together. 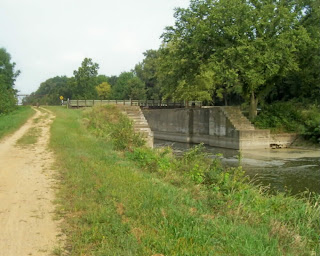 Lock 17, just east of Wyanet, illustrates the use of concrete.  The girder bridge across the lock used to roll to the north to provide additional vertical clearance. 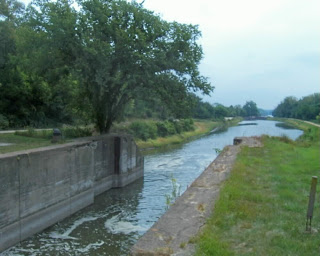 At the Panama Canal and the Welland Canal, the triple flight locks are part of one massive casting.  Here, where there locks do not come in pairs, there's a meeting basin at which barges going up can trade places with barges going down.  The view is downhill toward the Illinois River.

There are a few spots along this stretch of the canal offering views of the adjacent former Rock Island main line, now operated by Iowa Interstate.  Steam trains are running today, to raise money for the Tiskilwa and Sheffield Fire Departments.  I took videos.  There was plenty of time to walk along the canal from one photo spot to another. 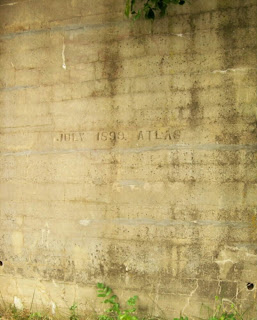 Concrete everywhere ... the abutment for the truss bridge just upstream of Lock 17.  The truss bridges remain as historic relics.  You can walk across them but the use of motor vehicles is prohibited, and not advisable. 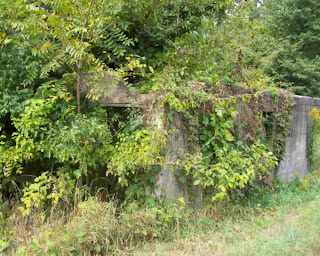 This ruin, upstream between Lock 17 and Aqueduct 4 (with an unobstructed view of the Iowa Interstate at an elevation below the canal grade), is the workshop for casting concrete fittings. 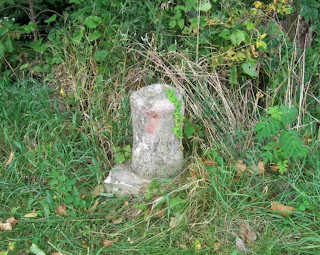 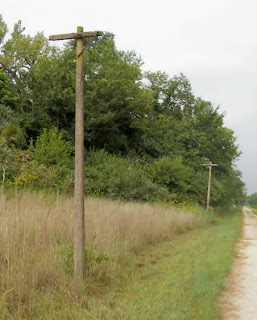 A few concrete utility poles remain near the workshop.

But there were trains to catch.  I had time to follow the noon departure from Tiskilwa into Sheffield, there to discover that a ticket to ride could be had.  Nothing like smoke and cinders on a warm day (the one day of relief from this very late heat wave being not much relief.)

The Sheffield fire department had left a message on its non-emergency line that the trains had sold out.  Apparently early sales were slow, thus neither community arranged with the railroad to offer a late afternoon trip, then tickets went very quickly.  The presence of a steam train on the Iowa Interstate did take at least one transient by surprise. 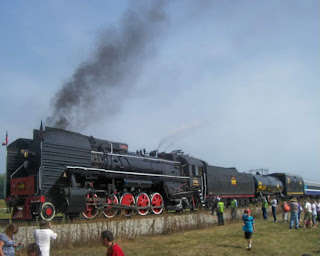 The power for westbound trips: Iowa Interstate 7081, a 1986 product of Datong.  The Chinese QJ is based on the Soviet LV which itself borrows a few ideas from the Baldwin Tb 2-10-2 built as part of the Big Engine approach during the Stalin years.  There are a lot of details of the tender, cab, turret, and fittings that are similar to the Andreyev 4-14-4, and digital cameras are useful tools for such research.  Behind the locomotive: additional water, the tool car, eight coaches that used to haul Montreal commuters on the Canadian National, and a diesel for leading eastbound moves. 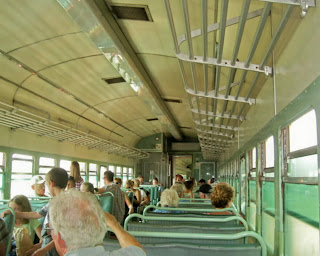 The coaches have lots of capacity for passengers.  The lower windows are the kind of plastic that's prone to fogging, and the seats look to have been removed from school buses, probably not what Canadian National used.  The safety messages inside, though, are in Quebecois. 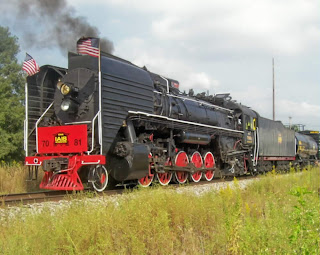 Upon return to Sheffield, most of the passengers may have been sufficiently sated, or the kids sufficiently cranky, that unobstructed views of the locomotive were relatively easily obtained.  This locomotive retains some of its Chinese styling.  The other one has black driver centers in the North American fashion.
Posted by Stephen Karlson at 22:47