The Wall Street Journal evaluates two dimensions of college football performance.  On the horizontal axis, they plot expected performance, on the vertical, their familiarity with scandal.

At the outer reaches of the first quadrant, Wisconsin, Clemson, and Stanford define the frontier, although the convex closure of the first quadrant is not vertical, because Alabama ranks higher on expected performance, albeit it's in the fourth quadrant for somewhat greater familiarity with scandal.

Northern Illinois is clustered with Fresno State and Brigham Young within the convex closure of the first quadrant.  I suspect that's because Northern Illinois, along with most of the other Mid-American Conference teams, make heavy use of student activity fees to support the revenue sports.

The weekend's returns give no reason to question those powerhouse ratings. 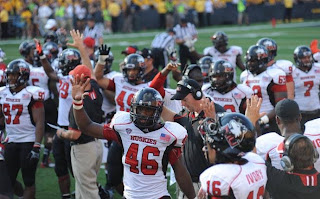 Northern Illinois University Media Services.
Five for the Fourth, at Iowa City.  The new coach and the new president continue the tradition.

The carping from the Des Moines Register is priceless.


Let’s be clear: Northern Illinois, an Orange Bowl team a season ago with Heisman Trophy contender Jordan Lynch at quarterback, is nobody’s slouch — tabbed the No. 24 team preseason by Sports Illustrated.

A Big Ten team needs to beat a Mid-American Conference team on its home field, though. Period. End of discussion.

Let's be clear: Northern Illinois went out of the selling wins for money games business years ago.
Posted by Stephen Karlson at 21:03