From my perspective, the only weekend football game to go completely right was the latest contest for Paul Bunyan's Axe.  Minnesota's players took exception to the traditional ritual of the winners.


Following Wisconsin's 20-7 win, the team's 10th straight in the series, the Badgers ceremonially chopped down the goalpost at the west end of TCF Bank Stadium. When they went to do the same to the goalpost at the other end of the field, they were met by Minnesota players and stadium personnel who wanted to make sure that didn't happen.

A brief skirmish ensued, with members of both teams posturing around the goalpost. Words flew between the sides, but punches did not. The Badgers ultimately pulled back and took their celebration elsewhere.

Back to the other goalpost, to pantomime chopping it down again. 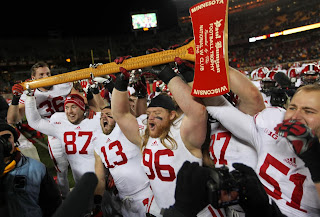 Given the length of the Wisconsin winning streak, it is likely that any future claiming of the Axe by the Minnesota team is going to have Gopher fans actually tearing down a goalpost, once the players have pantomimed the act.

Oddities elsewhere have contributed to Northern Illinois moving ahead of Fresno State in the BCS composite ranking.  I'm not sure exactly how the algorithm works (can it be more complicated than weighted least squares in panel data?) but Iowa's defeat of Michigan has to have helped.  Akron had a chance to hold Michigan out of the end zone late in the game.  Northern Illinois has now defeated three common opponents of Michigan: Akron, Central Michigan, and Iowa.  Somewhere in Notre Dame defeating Michigan there must be another convolution of that algorithm.

Posted by Stephen Karlson at 18:08