It's a Northern Illinois football tradition, and today the motto replaced the player names on the backs of the jerseys.  The weather conditions (flurries, highs in the teens, gusty north winds) reinforced the mood.  All in a day's work.  The current senior class is 22-0 at Huskie Stadium (the concept of a "home game" is elastic at Northern Illinois with Soldier Field being included, or not, as the need dictates) including this evening's tilt with Western Michigan, who rolled out special jerseys with "Row the Boat" as their motto.  In tonight's winds, "Reef the t'gans" would have been proper.


The Huskies (12-0, 8-0 MAC) already had found themselves in an opportune position this week when the BCS rankings revealed they jumped past Fresno State, a fellow non-automatic qualifier battling for a BCS bowl bid.

The Huskies goals could remain as long as they simply didn't blow it against Western Michigan (1-11, 1-7). Instead they turned the game into a blowout.

Up next, the Huskies will go for their third straight MAC championship victory.

But on Tuesday night they celebrated what already had been accomplished. The 17 seniors honored before the game, not including their retiring mascot dog, were the most successful in program history.

They extended their home winning streak to 26 games. The Huskies completed their first undefeated regular season in the modern football era.

Here's the Mascot Emeritus (at left), and the new Mascot. 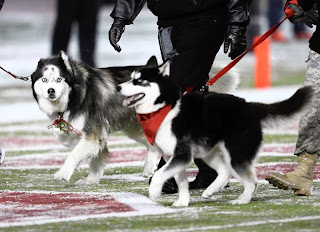 It was a suitably snowy environment for Diesel and Mission.  Next up, a trip to Detroit to face an opponent yet to be determined.
Posted by Stephen Karlson at 22:59