FRIDAY THE THIRTEENTH COMES ON MONDAY THIS MONTH.

If I did make any New Year's resolutions, they included however many it takes to clear out the backlog of draft posts, archived electronic mail, and incomplete rail mileage records that have been building up.  Perhaps a place to start is with an idea Marginal Revolution posted toward the end of 2011, the Hanke-Henry calendar.  This calendar corrects for the irregular length of a year by replacing the Gregorian 365 day year with leap years in years that are integer multiples of four but not integer multiples of 400 -- making the recent millennium a once-in-two-millennia event -- with a 364 day year and occasional sabbatical weeks.


That modern calendar would simplify financial calculations and eliminate the “rip-off factor.” To determine how much interest accrues for a wide variety of instruments — bonds, mortgages, swaps, forward rate agreements, etc. — day counts are required. The current calendar contains complexities and anomalies that create day count problems. In consequence, a wide range of conventions have evolved in an attempt to simplify interest calculations. For U.S. government bonds, the interest earned between two dates is based on the ratio of the actual number of days elapsed to the actual number of days between the interest payments (actual/actual). For convenience, U.S. corporates, municipals and many agency bonds employ the 30/360 day count convention. These different conventions create their own complications, inefficiencies and arbitrage opportunities.

Perhaps I'm a brain-brother of those traditionalist preachers of the Gilded Age who objected to Standard Time as the Vanderbilts trumping God, or perhaps, as a relatively small investor subject to banksters calculating my interest payments on a 360 day year, never mind the calendar, I have trouble mustering much sympathy.  Or perhaps I like the idea of extra-long down-time whenever Christmas and New Year fall on a Wednesday -- that we get a chill day the official first day back is an extra bonus!  But business interests find the Gregorian calendar inconvenient, and they have for years.


George Eastman, founder of the Eastman Kodak Company in 1892 and a consummate man of business, was a strong advocate of calendar reform in the interest of business and commerce. Eastman favored 13 identical months of 28 days. Writing in The Nation’s Business, Eastman complained that, with reference to the present Gregorian calendar, “There can be a difference of three days in the two half-years, and of two days in two quarters of the same year. Holidays occur on various days of the week, changing each year; shutdowns for holidays occurring in the middle of the week are expensive in certain plants. Complications arise in setting regular dates for meetings, in providing for holidays that fall on Sunday and in reckoning the passage of time, as for instance, in interest calculations.” But, Eastman’s calendar drifted relative to the seasons, which is unacceptable. He suggested fixing that problem by adding occasional extra days that would not bear weekday names.

Yes, and Irving Fisher weighed in, publishing an essay, "How Many Months Should There Be in a Year," in Pit and Quarry (sometimes the incidentals to archival research are more fun than the project objectives), endorsing some of the same ideas.  Two different versions of a business-friendly calendar received popular attention, here at page 51 of the 1940 New Wonder Book of Knowledge. 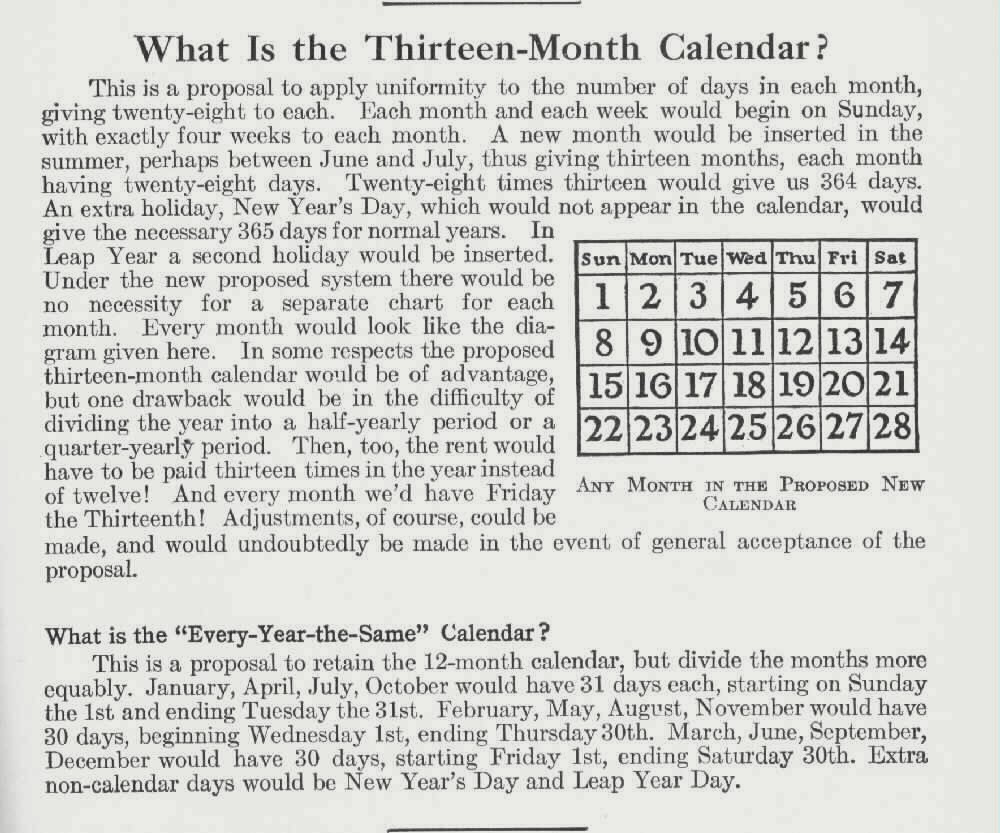 The Gregorian calendar works well enough.  It's a reasonable accommodation to an unaccommodating Nature that sends Earth around the Sun in just over 365 days (a figure whose prime factors are 5 x 73) and it allows each festive day to occur on a different day of the week.   Wired's Brandon Keim notes that the variety in festive days is to some people a feature.


“I gave a presentation at the American Astronomical Society meeting in Atlanta. Two young ladies came up to me, and one said she liked it. The other said she didn’t,” recalled [calendar redesigner and NASA astrophysicist Richard] Henry. “And I said, ‘Why?’ She said, ‘My birthday is always going to be on a Thursday.’ I said, ‘You’re free to celebrate when you want! What the devil difference does it make what it says on the calendar?’”


And actually, on the subject of measurements, I would refer people to a lovely little essay by George Orwell, whom would expect to be so very rational and yet, he liked the - just the sound of the words, inches and pounds. And there you have a man who just holds with tradition sometimes, even when it doesn't make sense.

But it does make sense, and, unlike the dirigiste metric system, it's emergent.
Posted by Stephen Karlson at 15:27