This tribute at Light Rail Now includes a picture of Mr Tennyson at Speedrail. 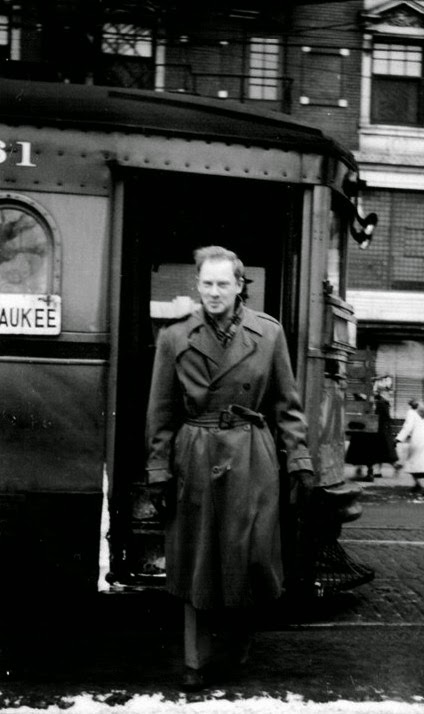 
A lane of autos waiting at traffic signals can move only 900 passengers per hour, not enough to keep a city busy or healthy. I do not know the streetcar headway, but with 56,700 weekday passengers, it sounds like 4,500 one-way in the peak hour, 5 times auto capacity. With 90 people per 4-axle car, that would require a 1.2-minute headway, 50 cars per hour. With articulated cars, a 1.8-minute headway could handle it.

The point is, who wants to allow 900 [Mayor Rob] Ford supporters to block the movement of 4,500 people per hour? Polls will not move anyone, but those 800 automobiles with 900 people will block 4,500. That is stupid, uneconomical, and grossly unproductive. When gridlock gets bad, transit speed falls to three (3) miles per hour. A streetcar costing $235 per hour will cost $78 per mile at three miles per hour; but at 6 miles per hour, which might be possible with no autos, the streetcar cost falls to $39 per mile, a saving of 50 percent for farepayers and taxpayers. If the media had the integrity and equity to explain it that way, I am sure the polls would change drastically in favor of streetcars.

[Misguided] politicians like Mayor Ford were running the U.S. Congress in 1959 when they banned streetcars from the District of Columbia [i.e., Washington, DC]. They did it to speed auto travel, but it did not work that way. It sped auto travel, all right — away from the city instead if into it.

The last [Washington] streetcar ran in 1962. Buying new buses escalated fares drastically and drove away most riders. Many downtown department stores went out of business. People with good jobs moved out of the city to escape auto congestion caused by automobiles, not streetcars.

Yes, and those left-turn lanes only contribute to further traffic congestion, as each traffic light now gets a left-arrow cycle to go with the conventional stop-go cycle.

One gripe: it's up to the Passenger Rail and Rail Transit advocates to make the case in such a way that people will get it.  At best, a reporter exists to report.  But you have to think of a reporter the same way that you think of a computer, or any other moron.  Garbage in, garbage out.  Clarity is not optional.
Posted by Stephen Karlson at 14:22