THEY DIDN'T TAKE CARE OF IT.

At the time the Coalition for High Speed Rail went public with its plans to restore Santa Fe 3463 to steam, the locomotive looked like a candidate for the Scrap Line. 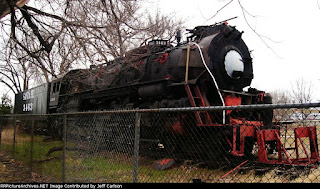 Trains reports, though, that the Coalition did not establish clear title to the locomotive.


Former Santa Fe 4-6-4 No. 3463 is in the middle of a legal battle between a Minnesota-based group, the Coalition for Sustainable Rail, who wants to restore it and a group of Topeka residents who say the engine should stay in Kansas. In May, CSR filed a lawsuit asking a judge to determine who owns the historic engine. CSR claims that it purchased the engine in 2011.

The ownership trail, however, is tangled.


The engine was retired in 1953 and later donated to the city of Topeka. As the railroad prepared to donate the locomotive a group of volunteers formed a nonprofit group, the Topeka Children and Santa Fe Railroad, to build a display site and help maintain the engine. The engine was officially put on display at the Kansas Free Fairgrounds during a small ceremony on Nov. 3, 1956.

Kansas Legislature revised state law to require all corporations to file annual reports. In 1972, the secretary of state requested an annual report from the group but no one from the original nonprofit was left or around to respond. In 1973 the entity was deemed revoked.

In 2011, CSR began its search for a locomotive for its project and discovered No. 3463. Negotiations took place and on Nov. 15 of that year a purchasing and sales agreement was signed. The following year, CSR began a cosmetic restoration and, on Jan. 11, 2013, a bill of sale was executed between Railroad Heritage and CSR. But a few months later three local rail enthusiasts, Phillip Dittmer, Thomas Dittmer, and Jerry Petrel, claiming to represent the revived Topeka Children and Santa Fe Railroad nonprofit, stated that their group was the proper caretaker of the engine and that it could not be moved.

Tools. Where were these guys while the engine was rusting away, or while Coalition staff were doing a cosmetic restoration?