With the Packers returning to camp, The Lombardi Sweep. 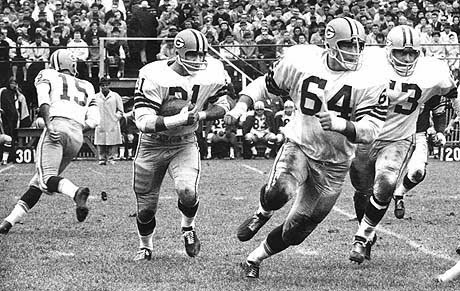 In those days, the nine hole was to the right.  Starr has handed off, Lombardi watching, Taylor carrying, Kramer and Thurston blocking.

A fan from Tennessee asked Packer Question Man Vic Ketchman about the return of the sweep.  Apparently, the personnel are different these days.


The sweep wasn’t about Taylor and Hornung as much as it was about Kramer and Thurston. You have to have guards that can get out in front of the backs. Kramer was 6-3, 245, and Thurston was 6-1, 247. Those guys could move and they were small enough to maneuver in traffic. Today’s guards are 70 pounds heavier and much higher cut than the pulling guards of yesteryear. It’s a different game. The guards of yesteryear had to be able to move because they couldn’t use their hands. They had to get guys out in space and cut them. Today’s guards are bigger and stronger and have a rules advantage Kramer and Thurston didn’t enjoy. Everything about today’s guards favors walling off instead of pulling out. It can be done once in a while, but not as a staple, as it was in the Lombardi era. As big as today’s guards are, their tongues would be hanging out of their mouths if they were made to run like that.

Walling off, though, is part of the Lombardi lexicon.


The 2013 Packers have also resurrected a version of the most famous play in Green Bay history, the legendary Lombardi Sweep, also known simply as the Packers Sweep. The play was the backbone of the Lombardi teams that won five NFL championships and two Super Bowls. On the Packers Sweep, Paul Hornung or Jim Taylor would sweep behind the blocks of pulling guards Jerry Kramer and Fuzzy Thurston, who would create, in Lombardi’s famous words, “a seal here and a seal here,” forming an “alley.” The 2013 Packers have repeatedly run a version of this play in order to get [back Eddie] Lacy on the edge with pulling linemen paving the way.

There's a video at the link.  The nine-hole is now to the left, but the play call is probably not "Green left 49 on two" any more.


Though these Packers often run the sweep from the shotgun and with three split receivers, it’s the same basic concept that Lombardi’s teams executed to perfection. In the GIF above, the pass-first formation caused Chicago to put its safeties so deep to defend the threat of Rodgers throwing that they were nonfactors against Lacy.

The team that blocks better and tackles better ...
Posted by Stephen Karlson at 12:49