CONDEMNED TO REPEAT THE PAST.

The Chicago Transit Authority are soliciting bids for a fleet of up to 846 new cars, to be numbered in the 7000 series.  (Henry Cordell would say "vot' the hell, you don't start counting with zero.")  No word on whether those cars will have transverse seating: the bowling alley cars recently delivered produce more passenger complaints per passenger mile.  And the method of car construction precludes rearrangement of the interiors.

A hundred years ago, the affiliated companies that became Chicago Rapid Transit purchased a fleet of steel cars.  In anticipation of crush loading on subways that were at the time only contemplated, these cars were delivered with three doors per side and bowling alley seating.  Their story is told in Shore Line Dispatch No. 5, The Chicago 'L's Great Steel Fleet - The Baldies.  The cars were so-nicknamed because their all-steel construction, including rolled-steel roof, precluded any ventilators, trolley poles, whistles, or other clutter on that roof.

As delivered, some of the cars had temporary benches that could be flipped down in front of those center doors, which were never placed into service.  Many of the cars were later rebuilt, either with transverse seating including at those doors, or with the center doors replaced by a side panel.

On a second delivery of cars, the Rapid Transit thought better of the bowling alley seating, and delivered the similar Plushies with walkover transverse seating, and no center doors. 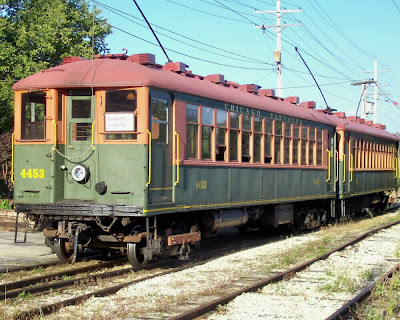 The cars are referred to as Plushies for the seating fabric, although the absence of center doors, and the clutter, including trolley poles, on the roof, also serve as spotting features.

Posted by Stephen Karlson at 23:09