In addition to the traditional family gathering, let us give thanks for favorable outcomes on the gridiron.

On Friday, the Northern Huskies spotted Western Michigan an early lead in Kalamazoo, then rallied to earn a fifth straight trip to the Mid-American title game in Detroit.  (Why does the Mid-American insist on holding all its conference events in garden spots like Detroit and Cleveland?)  There's beer in the cooler for the game this Friday evening.  It's a return engagement with Bowling Green.

On Saturday, the Wisconsin Badgers spotted Minnesota (motto: ten thousand ways to surrender the Axe) an early lead in Madison, then rallied to retain the Axe for an eleventh straight year. 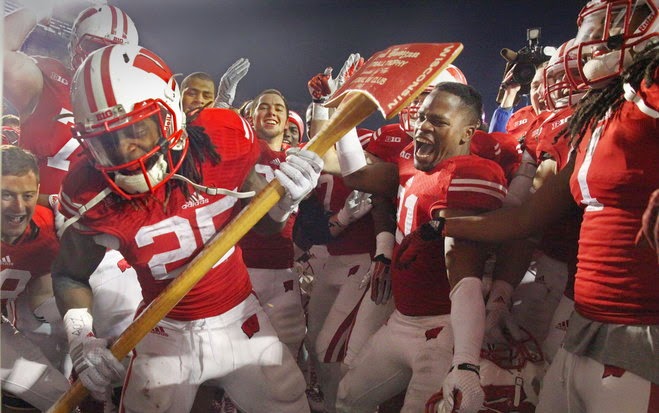 Minnesota recruited Jerry Kill away from Northern Illinois just after the Huskies gave up a late lead in the first of those Mid-American title games.  With an acting coach, the Huskies got a bowl win on the snowy blue field.  Mr Kill and team have enjoyed some success wrestling a pig away from Iowa, but the Axe is proving a more difficult prize.

On Sunday, the Green Bay Packers shut out the Boston Patriots in the first quarter and again in the third quarter, and played defense well enough to win, thereby generating a lot of playoff chatter to go into December.

Posted by Stephen Karlson at 23:57