THE PEOPLE ARE INSUFFICIENTLY ANGRY.

Last October, I visited the National World War II Museum in New Orleans, where part of the Pacific Theater gallery includes a retrospective of propaganda posters. 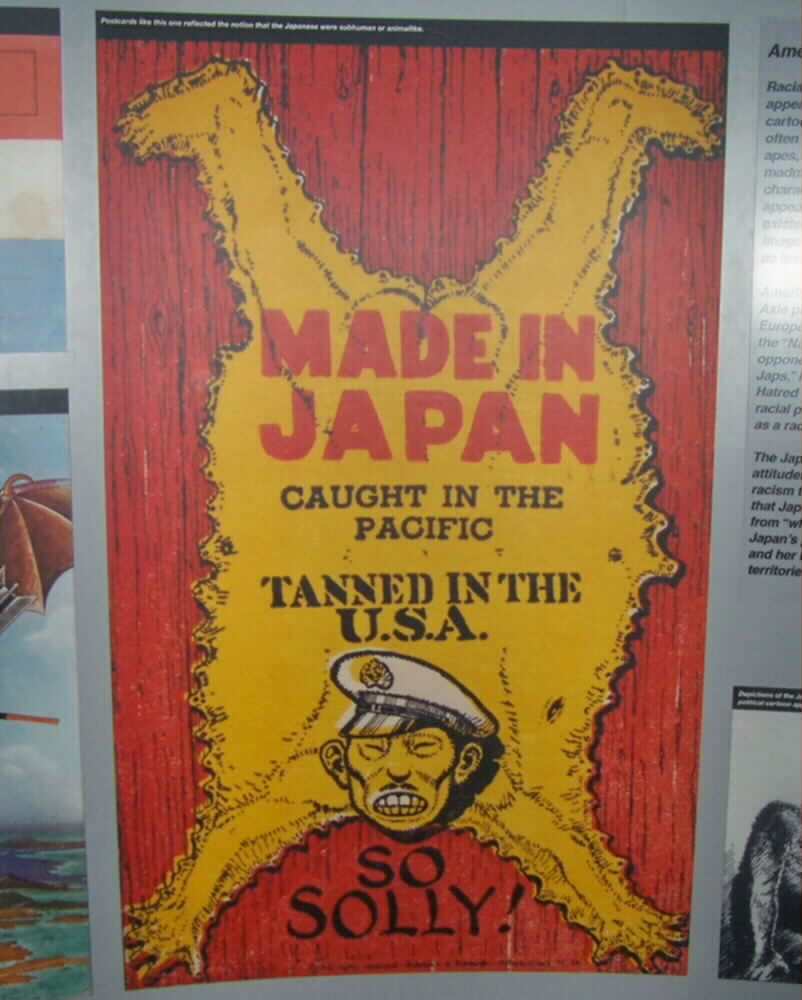 The display includes the obligatory obeisance to contemporary sensibilities, otherwise understood as the reflection of people, upon having won a war, asking, "did we really do that?"

But there can be no hope of victory in a future war until people are willing to countenance official scorn for their enemies.  Thus far, that is not the case in the United States, and until it is the case, Roger Simon of Pajamas Media is unlikely to be persuasive.


The country will be with us.  The average American, smarter than the elites, realizes the danger of losing. They care about their country unambivalently.  But we have to keep up the flow of information to them. We have to inspire them. We cannot stop.  We cannot give up.  We have everything to lose.

Too many aspirants to national office, however, are still too afraid of being mau-maued by self-despising multiculturalists to refer to savages as savages.

In the absence of such clarity, however, the best some opinion leaders can offer is wishful thinking.

"Are we going to let the ISIS horror show continue week after week without end?"  That draws criticism from Mr Matthews's left. "Worse than incinerating a nun, apparently, ISIS might kidnap a celebrity. Then we would have no choice but to send in a fictional character."  With a recommended alternative to making the rubble bounce.


A better path forward can only be forged by peoples’ movements on the ground in Iraq and Syria — movements that still exist, still matter, and continue to organize for workers’ rights, gender justice, war reparations, and people power, even amid the death and displacement that has swallowed up all the headlines.

Now is a critical time to seek to understand and build solidarity with Iraqi and Syrian civil societies. Heeding their call, we should strengthen awareness here at home of the tremendous political and ethical debt the United States owes all people harmed by the now-discredited war on Iraq and the crises it set in motion.

Somebody has been violating Islam's proscription of the use of intoxicants or narcotics.  Perhaps, though, the self-despising multiculturalists and the limited-intervention conservatives such as Pat Buchanan can find common ground.


But about whether ISIS is an "existential threat" to us, or if this war is really our war, there is no agreement.

North of Syria, along 500 miles of border, sits a Turkish army of half a million with 3,000 tanks that could cross over and annihilate ISIS in a month. Former Secretary of State James Baker suggests that the U.S. offer air, logistics and intelligence support, if the Turks will go in and snuff out ISIS.

But not only have the Turks not done so, for a time they looked the other way as jihadists crossed their border to join ISIS.

If the Islamic State, as Ankara's inaction testifies, is not viewed as a threat to Turkey's vital interests, how can it be a threat to ours?

There are reports that the Saudis and the Gulf Arabs would be more willing to participate in a war on ISIS if we would first effect the ouster of Bashar Assad.

Everyone in the Middle East, it appears, wants the United States to fight their wars for them. But as they look out for their interests first, it is time we started looking out for ours first.

Foremost among those interests would be to avoid another $1 trillion war, with thousands of U.S. dead and tens of thousands of wounded, and a situation, after a decade of fighting, as exists today in Afghanistan and Iraq, where those we leave behind in power cannot hold their own against the enemies we defeated for them.

Indeed, particularly because there is no regional power arguably worth preserving.


The Islamic State has plugged into the most powerful currents of the Middle East. It is anti-American, anti-Zionist, anti-West, Islamic and militantly Islamist. It promises to overthrow the old order of Sykes-Picot, to tear up the artificial borders the West imposed on the Arabs, and to produce a new unity, a new dispensation where the Quran is law and Allah rules and all Sunnis are united in one home whence all infidels -- Jews, Shia, Christians -- have been driven out. Hateful as it is, ISIS has a vision.

Hezbollah, Iran, Assad, the Houthi rebels, all Shiites, understand this.

They know they are in a fight to the death. And they fight.

But it is the Sunni Arabs, the royals on the Arabian Peninsula and the sheiks on the Gulf, to whom this should be a fire bell in the night.

For ISIS is out to dethrone these perceived royal puppets of a detested America and to reclaim rightful custody of Mecca and Medina.

The Shiites are already in the field. The Sunni are going to have to fight and win this war against ISIS, or lose it all.

Perhaps. Or perhaps the Sillies are the latest manifestation of the long-running proxy war between the Persians and the Bedouins. (Or is it between the Medes and the Hittites? Oceania and Eastasia?)  And thus, the proper foreign policy response might be to stay away.
Posted by Stephen Karlson at 14:34