THE RETURN OF THE HOT SHOTS.

Express interurbans return to the South Shore Line in the form of the Sunrise Express and an unnamed evening train.  (The full schedule offers as many morning westward and evening eastbound rush hour trains as were offered in the fall and winter services of 1959, but the base service is much skimpier.)

At that time, South Shore's Morning Hot Shot left South Bend at 7.40 (Eastern), arriving Chicago at 8:32 (Central), comparing favorably in overall running time with the 6 am (Eastern) Sunrise Express that reaches Chicago at 6:55.  But the Hot Shot made a few more stops, and it was paired with a Chicago Express calling at all stations Michigan City to Chicago.  The two trains might have exchanged cars at Gary, which at the time was a four-track station with two pocket tracks on the west end.  The Chicago Express arrives, leaves a car or two on the westbound through track to add to the head end of the Hot Shot, additional cars pull ahead and set back into a pocket track.  Then the Hot Shot arrives, couples the add cars on, and proceeds to Chicago.  The Chicago Express follows.

Note, in those days, an interurban referred to a train making only a few stops as a Limited, if it made only recognized station stops, it was an Express, and a Local could be flagged down (light a rolled-up newspaper with a match at night) at any road crossing.

Eastbound, the base service was hourly departures for South Bend, and departures on the half-hour for Gary.  (Click to enlarge, I made a largish scan.) 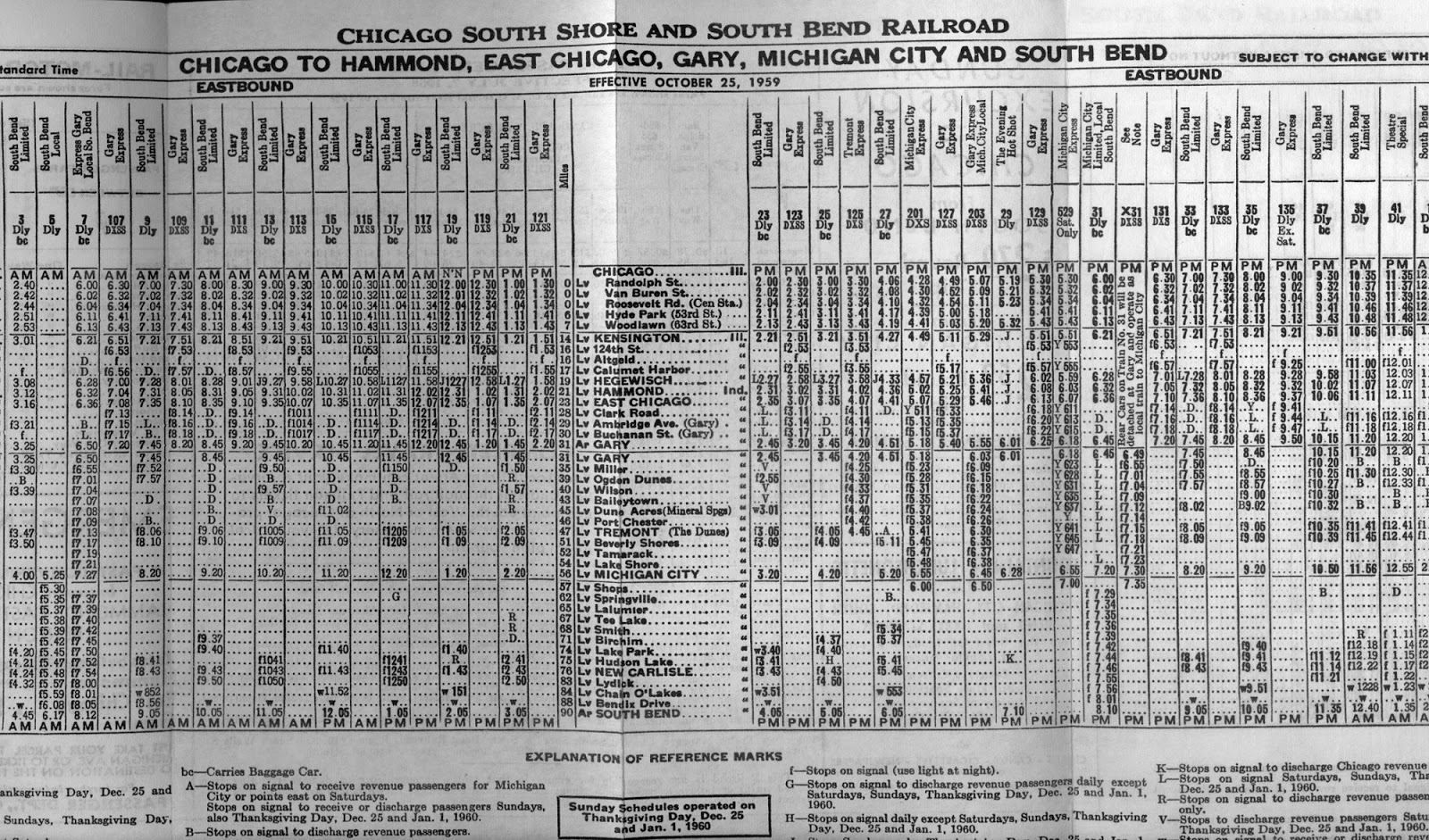 The evening Limited for South Bend now leaves Chicago at 3:57.  Apparently South Bend service is for early risers and early leavers, as there's only one more South Bend train during the rush hour, leaving at 5:10 (Central) and into South Bend at 8:43.  That's about the same departure time as the old Evening Hot Shot, at 5:19 but into South Bend at 8:10 (shown as 7:10 in the timetable, you have to read the footnotes carefully.)

But the way the railroad served commuters to destinations short of South Bend and Michigan City was different in those days.  Today, there's a Michigan City Express leaving Chicago at 4:02, picking up the stops the Limited doesn't make (and, serendipitously, the Limited is Train 11 and the Express, 111).  But note in 1959 that a Gary Express ran a few minutes ahead of the Hot Shot to Gary, then ran behind the Hot Shot as a Michigan City Local.  And the timetable is explicit that the 6 pm departure for South Bend, train 31, cut cars at Gary to become another Michigan City Local.  The motorman and a conductor for that train might have arrived at Gary on the earlier train 129.

The one constant in the two schedules appears to be a 4:28 departure for Michigan City that these days requires fifteen additional minutes despite making fewer scheduled and no flag stops.

The new Hot Shots are experimental trains, I understand these were requested by passengers.  We'll see what sort of reception they get.
Posted by Stephen Karlson at 23:51

Is there a repository for old train schedules online somewhere? I'd be fascinated to look up the trains I'd taken in the past (mostly European).

No. Paper copies of the Official Guide are in some university transportation libraries, but those are few and far between. And archives of official schedules for other countries might be with their ministries of railways (I know there is such an archive of employee timetables for the UK).

Making digital images of timetables is a challenge, as they used to be published in idiosyncratic sizes, and when the railroads cut back, printed on a single large sheet, much like maps.