Crosscut proposes to restore the cowboy edition of Switzerland.


Electrify a main line rail corridor with renewable energy. Make the line so competitive it can haul freight at a fraction of the energy it takes diesel-powered trucks and ignite a resurgence in passenger ridership — on electric trains at high speeds.

The Northern Transcontinental route, the one the Empire Builder follows from Chicago to Seattle, is the one where rail experts, renewable energy economists, climate activists and railroad workers say they could first demonstrate electric rail’s low carbon potential. 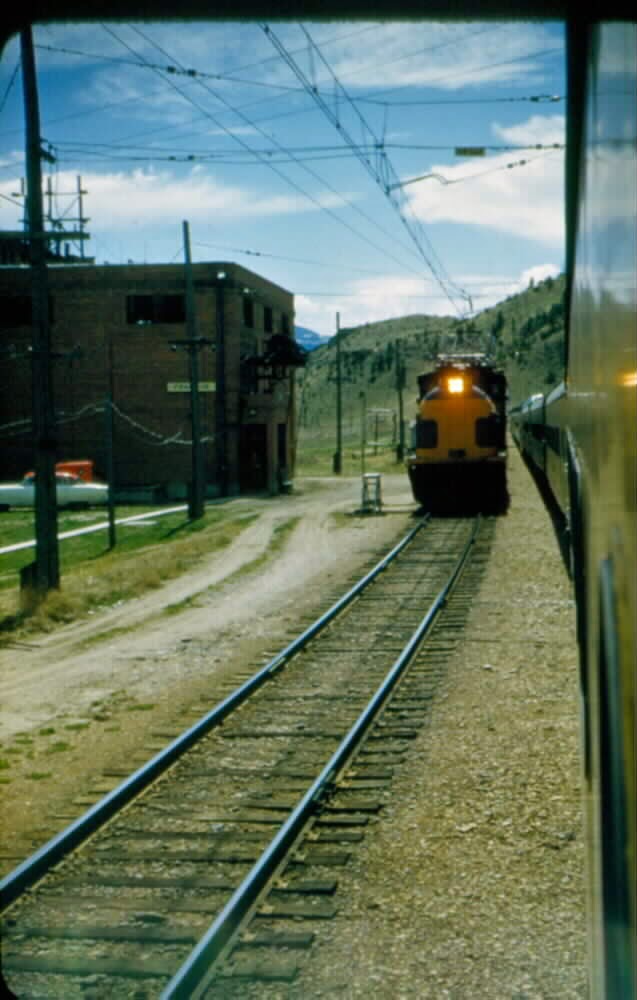 The article notes the short electrically operated section on the Great Northern through the Cascade Range, but The Milwaukee Road's Lines Electrically Operated might not have been on the author's reading list.


“Our objective,” says [environmentalist Bill] Moyer, “is to create faster, more efficient trains with increased reliability.” What makes the Northern Transcontinental particularly appealing — the route runs from Illinois, through Wisconsin, Minnesota, North Dakota, Montana and the Idaho panhandle before heading through Washington — is its potential to be powered entirely by renewables: sun, wind and hydro power. When you electrify, says energy economist [Bruce] McFarland, you increase speed because electric trains have better acceleration and braking than diesel trains. It’s also less expensive to add horsepower to an electric freight train since power is obtained from the overhead wire instead of from a diesel generator built into the locomotive. Electrification will also reduce the operating costs of freight trains substantially, he adds. “Our baseline argument to the railway operator,” he says, is simple: Look at the money.

Advocates say the main selling points for electric rail are to jump-start a low-carbon transportation solution where rail can attract freight from polluting, highway-damaging trucks; help revitalize passenger rail; and guarantee good, sustainable working conditions for railroad workers. But the reality of exploding oil trains — four in the last four weeks alone — is not far from their minds.

Electrification advocates have long pointed out that diesel-electric power implies carrying sufficient generating capacity along with each train to be able to get over the toughest summits: that's just excess weight going down, and the diesel locomotive's dynamic brakes produce heat, rather than returning current to the wires to set back the railroad's electric meters.  Railroad publicists of an earlier era described it as "Electricity keeping its own books, forsooth!"  Those same publicists also described the hydroelectric power as white coal, and advertised open-air sightseeing cars free from "cinders that blind."  But the structure to support the overhead wires doesn't come for free, and at current prices, no railroad has yet made the investment.


So we burn neutrons and Powder River coal instead, and somebody has to pony up for the catenary. Diesel fuel prices are not yet high enough for anyone to seriously look at that prospect, although the idea of some musical thyristor-controlled motors with the authority of a Great Northern W-1 topping the Cascades and keeping electricity's books downhill with 125 stack cars on appeals.

Perhaps yet in my lifetime?
Posted by Stephen Karlson at 16:29