LUCK IS THE RESIDUE OF DESIGN.


It was, according to survivors of the deadliest Northeast Corridor rail crash in a generation, a scene of such sudden destruction they could hardly believe they had witnessed it - let alone walked away.

All seven cars being tugged by a New York-bound locomotive flipped onto their sides or snapped to a severe tilt near I-95 as the train, roaring at twice the posted speed, blew a curve at Frankford Junction at 9:21 p.m. Tuesday.

Here's another view of the train. 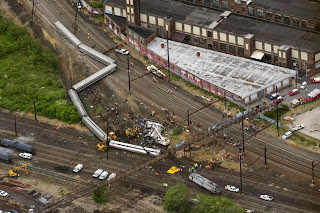 To the best of my knowledge, the train was on the inner right-hand track in the direction of travel; when it left the rails, the shredded lead car, a business class car, may have hit one of the catenary poles, a part of which is stuck in the roof of the inverted second car; the third and fourth cars are on their sides, and cars five through seven are derailed but upright.  I do not know in which cars passengers were killed, although several of those people were noted as being business class passengers.  That passengers walked away from the upright coaches, though, is by design.


U.S. crashworthiness standards currently include reliance on heavier rail equipment compared with European or Asian counterparts, which lower top speed potential and energy efficiency. The U.S. approach is weighted toward crash survivability, as opposed to simply crash avoidance, as in other locales.

[Federal Railroad Administration] and some other safety experts have favored this approach in part because many Amtrak trains use freight railroad rights-of-way over all of much of their routes.

Meaning a passenger car might have a close encounter with a 130 ton grain hopper or a tank car loaded with Bakken crude or ethanol or something caustic or acidic.  Meaning an Amtrak train, whether a consist of Amfleet cars or an Acela Express rake, is heavier than its European counterparts, tougher to accelerate or to brake.


Vehicle structures are built from stainless steel and are designed to survive major impacts. Crash energy management techniques based on 3rd generation [French] TGV technology control the structural deformations in the event of an accident, to increase the safety of the passengers. Under floor equipment is specially reinforced to withstand the rigors of operating in urban areas, where shopping carts, tires and other debris frequently find their way onto the tracks. (The Northeast Corridor is only partially fenced in, as opposed to European high speed lines.) The Acela Express is the first train to comply with the Federal Railroad Administration's Tier II crashworthiness standards, touted to be the toughest in the world. The downside of the heavy emphasis on passive safety is the significantly higher weight of the trainset, compared to worldwide high speed rail practice. The Acela Express is built about 45% heavier than a typical TGV.

And thus, there's no reason to put seat belts on passenger trains.


The Daily News reached out to the National Transportation Safety Board yesterday and a spokesman referred seat-belt questions to the Federal Railroad Administration. An FRA spokesman said decades of research and oversight has meant passenger rail cars are "engineered with various passive restraint interior design features" that allows passengers to "ride-out an accident in a contained space."

Exactly. One of the selling points of train travel is the opportunity to head to the diner or bar car or lounge to mingle, and strapping passengers in attenuates that impulse.


Robert Paaswell, director of the University Transportation Research Center at the City College of New York, in a guest column in the New York Daily News yesterday, said seat belts "probably would not have saved the victims." He said they can't be compared to airplanes or cars.

No, if your carriage rolls over and breaks apart, a seat belt is unlikely to do much good.  The point is to prevent the breaking apart or the rolling over in the first place.  But it's up to the engineer to comply with the General Notice and the Special Instructions.


So for now, keeping trains under control remains the responsibility of railroad engineers. They are a proud bunch of men and women -- I've met thousands of them -- and do their jobs faithfully. Like it or not, in their attentiveness and judgment lies our safety.

That will be true whether, or if, Positive Train Control ever becomes operative.

That will be true whether, or if, Congress appropriates money or leans on the Federal Communications Commission to expedite the completion of the control system on the Northeast Corridor, or writes a realignment of Frankford Junction into an infrastructure bill.

When train crews disregard the General Notice and the Special Instructions, the result can be a broken train and dead people.  People who have names and stories.
Posted by Stephen Karlson at 15:39