RISE TO THE INTELLECTUAL CHALLENGE.

Senior capstone projects at the Milwaukee School of Engineering well might have commercial value.  Sometimes, sustainability is substance, rather than slogan.

The system has soil sensors that can be adjusted to determine when plants get water. The system also can turn itself off if in extreme temperatures, ensuring that plants aren't watered at the wrong times.

Residential irrigation systems now on the market aren't as environmentally friendly as this one, according to the students, or they don't have sensors that monitor weather conditions to determine when plants need water.

The system, named Sprigs, has a battery that's charged by the solar panel. It also has a digital control panel, and a water-level sensor is used as a power-saving device, turning the system off if the water container runs low on water.

Sprigs is well suited for a backyard garden, Almquist said, and it can use stored rainwater rather than water from the tap.

I'll have to look at the prospectus for this system, it might well go on the fence posts at the just-planted Victor E. Garden. 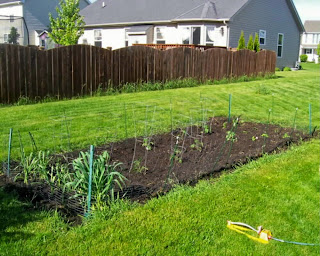 Posted by Stephen Karlson at 16:27