TOO FAST FOR CONDITIONS.

Last night, Amtrak's train 188, a late evening Northeast Regional service from Washington to New York, left the rails on a curve at Frankford Junction.  A Huffington Post story from this morning included a series of Associated Press photographs. 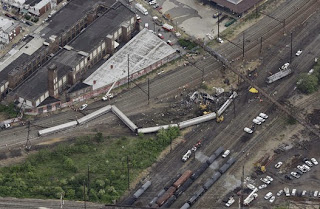 Note in the above picture that the rear of the train is still within the right of way.  The dark scar through the middle of the picture is the path of the motor, which is upright on the freight tracks at right.  The lead coach is shattered (probably broken on the catenary support at left) and the second through fifth coaches remained coupled and followed the motor.

Contemporary trains have event recorders.  In the absence of speed recorders, knowledge of the weight and the location of the center of mass of the locomotive is sufficient information to reconstruct the speed of the train, and railroad engineering departments have prior experience at so doing. 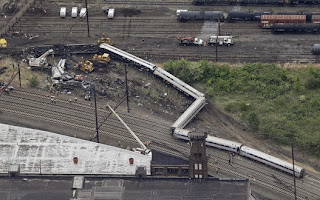 Here is a reverse angle, showing the path carved by the motor leaving the rails, and the underside of the second car.  It appears that the food service car is the third car.  That's a different formation from Midwest corridor services, in which the combined cafe and business class car is at one end of the rake.

Note in both photographs the tank cars on the freight tracks.  The motor just missed crashing into one cut of tank cars, which might have contributed to early reports of a collision with a freight train.  No collision, just an electric locomotive going too fast for conditions.

Slowly, the contents of the event recorder are becoming public.  We now know that the train went from a 70 mph section of track into a 50 mph curve at 106 mph, when the engineer big-holed the train.


According to NTSB Member Robert Sumwalt, the northbound regional train was traveling at 106 miles per hour as it approached a 50 mph curve near Frankford Junction in North Philadelphia. At that point the engineer then applied the emergency brakes and three seconds later the train was moving at 102 miles per hour.

At such a high speed, the train is likely to want to go straight, the inquiry's findings as to whether braking further destabilized the train will be instructive.

As of this evening, seven people are confirmed dead, with some passengers not yet accounted for.  But a high-speed crash on a North American train is still more survivable than a high-speed bus crash, or a crash on a European train.


The train was carrying 238 passengers and five crew members. Hospitals have treated more 200 people, at least half of whom have been released. That figure included eight in critical condition among the 23 injured passengers at Temple University Hospital -- the closest trauma center to the crash site. The number of patients there was down from 25 earlier. Most patients’ conditions were either stable or better according to officials.

The Rules Examiner has asked the Superintendent to remind readers of the General Notice.


Safety is of the first importance in the discharge of duty.

Obedience to the rules is essential to safety.

A crew member or two will be disciplined, and passengers are dead.
Posted by Stephen Karlson at 23:55