There's a heritage trolley line, currently operating restored streetcars. There's also a streetcar service, operated by the city transit authority, that just went into operation, supplementing an existing light rail service.  Somebody got the idea of extending the car line, running cars from downtown to the airport.

But the Charlotte Area Transit System said the existing rails could eventually handle faster, longer trains that might extend to the airport or to the Matthews.

There are no concrete plans – or funding – to build those lines.

But CATS is studying whether it could build a streetcar along Monroe Road that might eventually move into its own right-of-way adjacent to the CSX freight rail tracks. That study could be finished in 15 months.

That's exactly how city streetcar lines became side-of-the-road trolley lines and later interubans, starting about 1895.  But that evolution involved problems, and Charlotte's operators are aware of them.


The Lynx Blue Line usually operates in its own right-of-way, which allows the light-rail trains to maintain their speed.

On the southern stretch of the line, there are bridges that carry the train over busy roads such as Woodlawn and Tyvola roads. Closer to uptown, the light-rail crosses streets at grade-level, but the train has priority over cars.

The streetcar is different. It stops at red lights and has to wait for congestion to clear.

[Interim authority director Richard] Muth said the 1.5 miles of track could also handle larger trains. They could operate in their own right-of-way in the suburbs, but then merge into the existing streetcar track and move slower through uptown.

In Denver, that’s how some light-rail lines work. The trains reach high speeds in outlying areas, and then slow down and act as streetcars as they reach downtown.

Yes, the North Shore Line and The Milwaukee Electric reached their Milwaukee terminals that way. 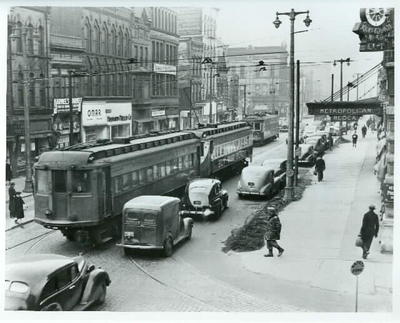 That's North Third Street in Milwaukee, with the interurban train headed toward Cedarburg or Port Washington about to pass Usinger's sausage market on the near side, and Mader's restaurant on the far side.  A streetcar headed downtown approaches on the other track.  City cars and interurbans both had to obey traffic signals, and an interurban car would inevitably catch up with a city car, and the trip to the Public Service Building would get longer.


Having larger trains on Elizabeth Avenue and Trade Street could present problems, however.

One is that a longer train could create its own traffic jams by blocking intersections when it stops.

Another potential problem is time: If CATS were to operate a light-rail line or streetcar to Matthews, it would be trying to attract commuters in a hurry.

The existing streetcar line takes between 11 and 12 minutes to travel from Novant Presbyterian Medical Center to Time Warner Cable Arena. That slow travel time could make commuters wary of using the train.

Interurbans went to near-side car stops precisely to keep longer trains out of the crossings. But running city cars and interurbans on the same track requires careful scheduling.  City streets, in particular, are not good places for a third track or overtaking sidings.
Stephen Karlson at 11:18
Share