Here's a Throwback Thursday impression of a daytime ride on Amtrak's Crescent last fall.  A previous Throwback Thursday got us from Washington, D.C. to Atlanta, and a recent book review featured historic Birmingham.  Next stop:  New Orleans.  No reason to book a sleeper on the day portion of the journey, and riding coach is a useful way to learn the purpose to which people put the train.

In much of the Amtrak network, there is one train a day, and if it goes any distance, many of the cities are served only by night.  Thus Minnesota and the eastern Dakotas, and I have more racked for that line.  The Crescent is a night train between the capital and Atlanta, and a day train from Atlanta to the Gulf.  When it's running late, that has to be nerve-racking for people relying on it to make a commitment.  For a vacationing ferroequinologist, having it on time or close to time is a good thing. 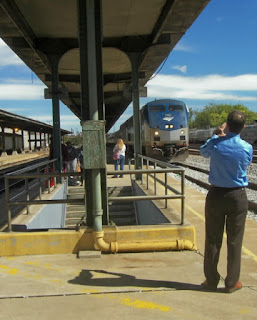 The passenger facilities at Birmingham make use of the former baggage area in what's left of the Louisville and Nashville station.  There once was a proper Union Station but like so many in the Sun Belt, they went for redevelopment before Amtrak.  Primitive facilities or not, the waiting room is full of passengers, and a full cart-load of luggage went on the baggage car. 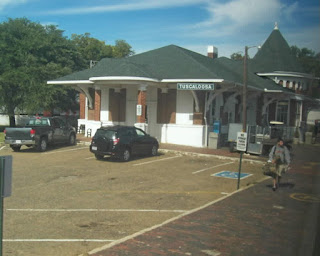 The station is reminiscent of the old and new Sturtevant, Wisconsin stations that several times a day have two trains in or near the platforms.  But the University of Alabama has more passenger train service than the University of Wisconsin or the University of Tennessee or Northern Illinois University.  It's midafternoon Thursday.  Perhaps there's more traffic on and off at weekends.

Train is running well although not ballast-scorching in the Milwaukee Road way.  Meridian 3.13 - 3.19. 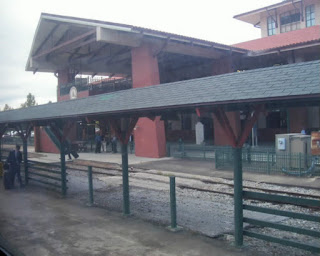 The Meridian Union Station has enough platforms and track to be worthy of the Michigan corridor or the New England end of the Northeast Corridor, although (as is often the case) the tracks closest to the building are out of service.  Train crews change here.  Although the Meridian and Bigbee Railroad make their presence known to Amtrak passengers who look out the window, the local short lines are not in the excursion business. 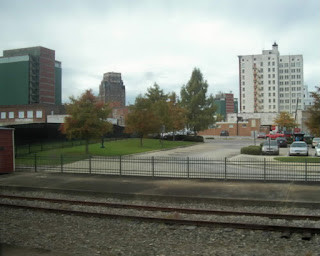 The real Gulf, Mobile and Ohio railroad used to serve Meridian, and a real Gulf, Mobile and Ohio train featured in the opening scenes of In the Heat of the Night, but the Hollywood Meridian didn't look like this.  Away from Atlanta, and as we will later see, Houston and Dallas, the smaller Sun Belt cities have some of the same forlorn properties of the smaller cities of the Rust Belt. 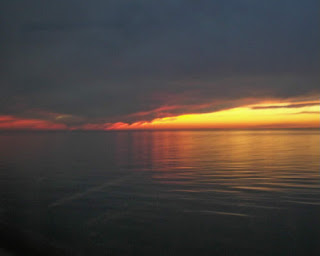 The railroad's causeway across Lake Pontchartrain has a highway bridge to its south.  I have a seat on the north side of the train, and the sun is setting.  Once into the New Orleans terminal area, there's a good deal of junctions traversed, and pulling ahead and setting back.  Arrive New Orleans 7.25, seven minutes to the good.

That part of the South never had a corridor service in the way Minnesotans or Michiganians, let alone residents of the Official Region understand it, and thus the Amtrak service simply kept what was there in 1971.  Cut the running time Birmingham to New Orleans to five hours thirty and add a second train, it just might work.  And I could win the Irish Sweep.

There's more evaluation of the Amtrak network to come.
Posted by Stephen Karlson at 14:15