It's difficult for the owners of a lakefront amusement park to resist the offers of developers who would like to sell upscale waterfront dachas or condominiums.  Call the roll:  Waukesha Beach, Muskego Beach, Crystal Beach, Nantasket Beach, Revere Beach, complete the list as an exercise.

Conneaut Lake Park, which we visited (fearfully for its future) last year, reopened, to the delight of day-trippers.


The park, which is open on Fridays, Saturdays and Sundays, appears to be gaining traction with its $10 ride pass. Several visitors said they decided to visit after reading about this year’s lower price on the Internet.

The Internet helped deliver Jodie Terlisner and her two sons, ages 8 and 10, to the park Friday afternoon. Ms. Terlisner, who lives in Atlanta, was staying with her family near Chautauqua Institution when they decided to visit the park.

The nonexistent lines at Conneaut Lake Park — the Blue Streak was running less than half full Friday — are both part of the park’s appeal and one of its biggest challenges.

Yes, there still is a Chautaqua Institution, just off the relatively new Southern Tier Expressway (Interstate 87) that soars across the southern end of Lake Chautaqua.  But the legal tangles confronting Conneaut Lake Park remain.


At a hearing Tuesday simulcast in U.S. District Court in both Erie and Pittsburgh, Chief Judge Jeffrey Deller of U.S. Bankruptcy Court of Western Pennsylvania said Trustees of Conneaut Lake Park has 14 days to file a revised, more detailed disclosure statement with the court on how the amusement park will reorganize its debts. Deller will set a hearing on the revised disclosure statement approximately one or two weeks after the filing.

Attorneys for the amusement park's creditors, meanwhile, object to the disclosure statement and have called for a liquidation of the park's assets to satisfy its outstanding debt.

Trustees is the nonprofit corporation that oversees operations of the park, which is a public trust. Trustees filed for federal bankruptcy protection in December 2014 to reorganize the amusement park's debts, which total approximately $3.9 million. The park's debts include overdue real estate taxes, interest and penalties that now totals more than $1 million.

"I see no reason why a resolution can't be had in this case," Deller told all sides at the conclusion of the hearing.

Trustees' proposed reorganization plan would use $611,000 in insurance proceeds from a 2013 fire that destroyed the Beach Club night club and the sale of some waterfront property to satisfy the outstanding real estate tax debt and emerge from Chapter 11 bankruptcy.

The waterfront property in question is north of the midway and the Conneaut Lake hotel. Whether the owners of waterfront dachas will want even a small amusement park to their south remains to be seen.

Thus, for Throwback Thursday, a visit to Conneaut Lake Park in July, 1984, before the ballroom and Beach club burned. 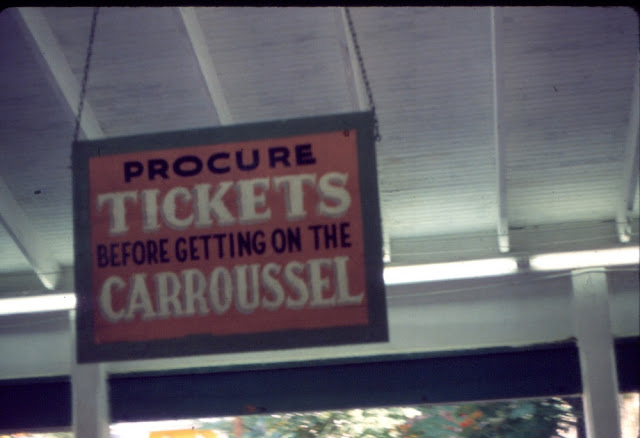 Here's where I picked up the variant spelling of carroussel.  Yes, I procured tickets.  At the time, there was still the remnants of a brass ring dispenser, something that's only in operation at Knoebels Grove any more. 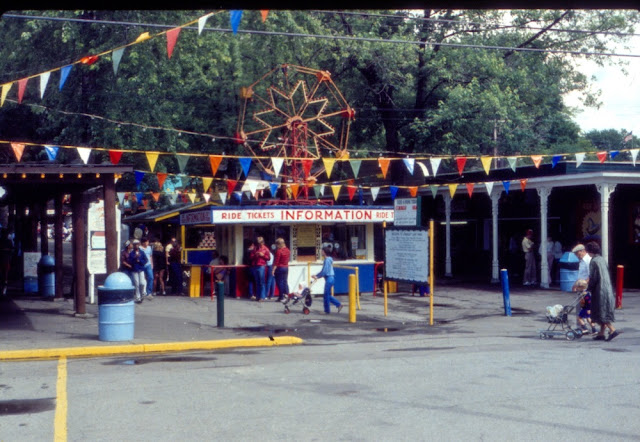 A few riders are procuring tickets.  The games of skill are in operation behind, down toward the lake. 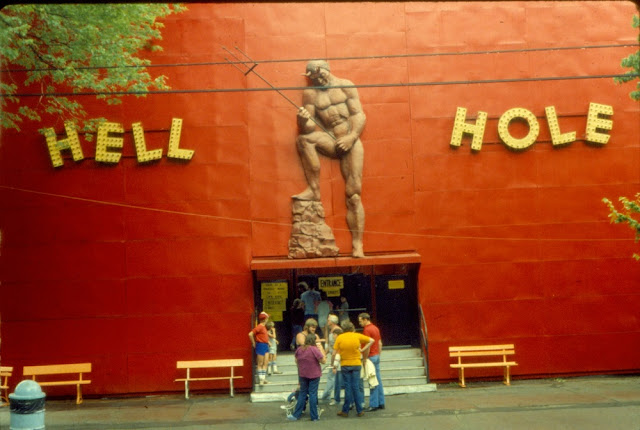 Hell Hole is one theme for the Rotor, a rubber-lined spinning drum for which the thrill is the sudden dropping of the floor once there's sufficient centrifugal force.  These attractions also provide a gallery for the less-daring members of a party to observe the daring ones spin around. 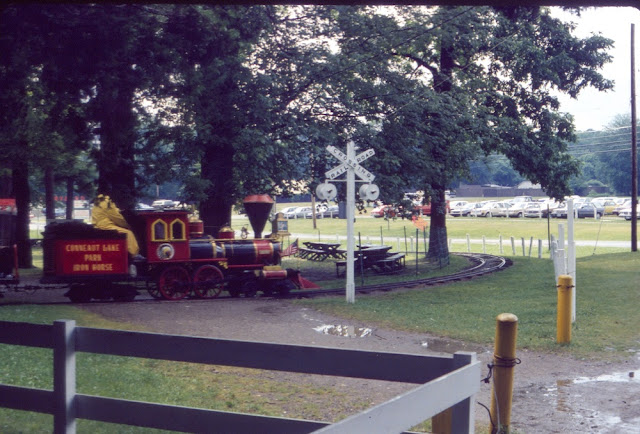 The train, in better days.  It's not the generic Chance C. P. Huntington locomotive.  Slightly non-standard crossbuck.  And it looks like I only get to Conneaut Lake Park on rainy days. 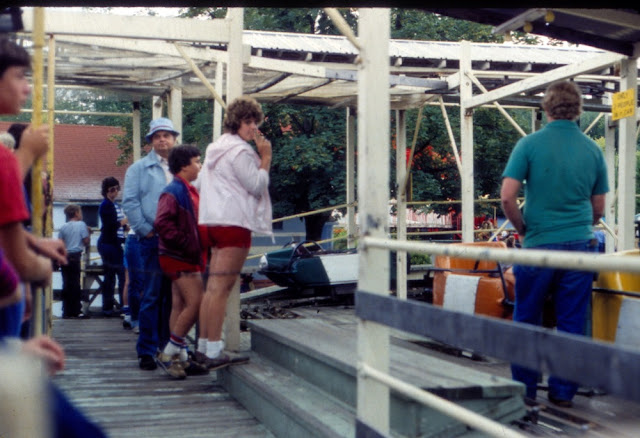 One of the unique roller coasters at Conneaut Lake Park was a wood-framed Wild Mouse.  There were a few of those permanent installations once, but as far as I know they're all gone. 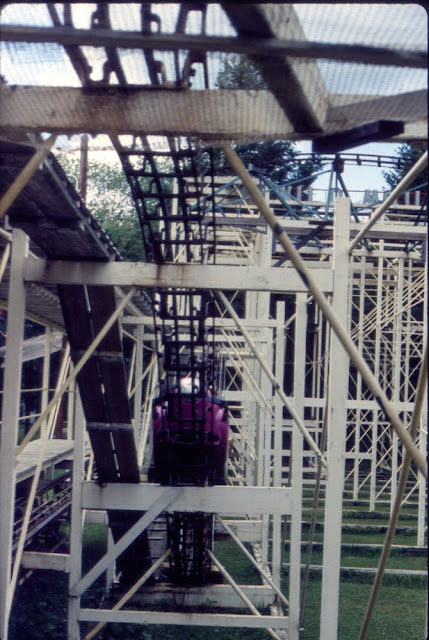 On board, it's the canonical Wild Mouse snap-hairpin-turns topside and a few big drops on the way back to the station.  The Wild Mouse tradition lives on, but the latest trick, as at Waldameer Park nearby, is revolving cars.

The Blue Streak roller coaster, which is highly regarded even in a world of linear induction motors and 400 foot vertical drops, once had a model board in the station showing the progress of the train. 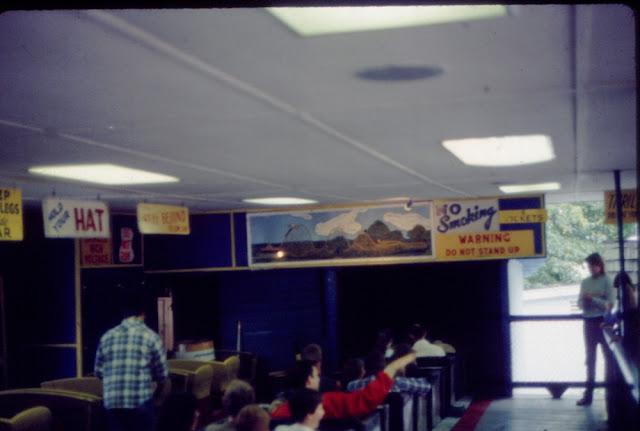 On board, there are three air-time hills on the way out, and good low-profile coaster action on the way back. 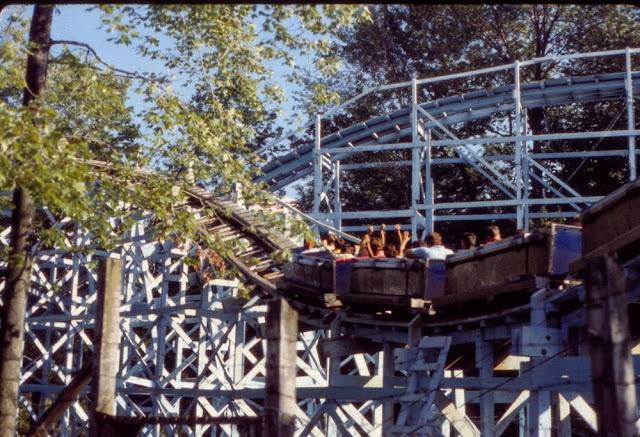 It's the fate of the Blue Streak that keeps coaster enthusiasts involved in attempts to keep Conneaut Lake Park operating.  That it's a human-sized amusement park, where riders are not subjected to television commercials while they're waiting in line (Six Flags accommodate long lines by providing pop stands at the 30 minute point) is also reason to hope for a resolution of the bankruptcy that doesn't involve the auctioneer.

Posted by Stephen Karlson at 12:35