THE WEAKEST LINK IN THE NETWORK?

Another #ThrowbackThursday,  a continuation of recollections of last year's train journey through the Southeast.  Previously, we got from Washington to Birmingham and Birmingham to New Orleans.  The Crescent is overpurposed as a day train west of Atlanta and a night train east.  At least it runs each day.  The Sunset only runs thrice a week, which makes trip planning more difficult.  Stay longer in New Orleans or San Antonio, for instance?  (Hotel rates are much lower in San Antonio.)  Use the Eagle home on a day that it's carrying Los Angeles cars, or not?  (Cheaper space when the train originates in San Antonio, midweek.)  Why not just go straight to Chicago on the City of New Orleans?  (Because when you're retired, there's no rush to get back to work.) 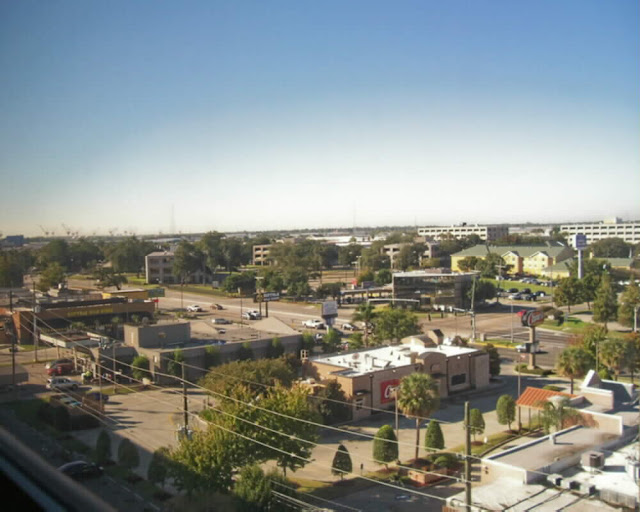 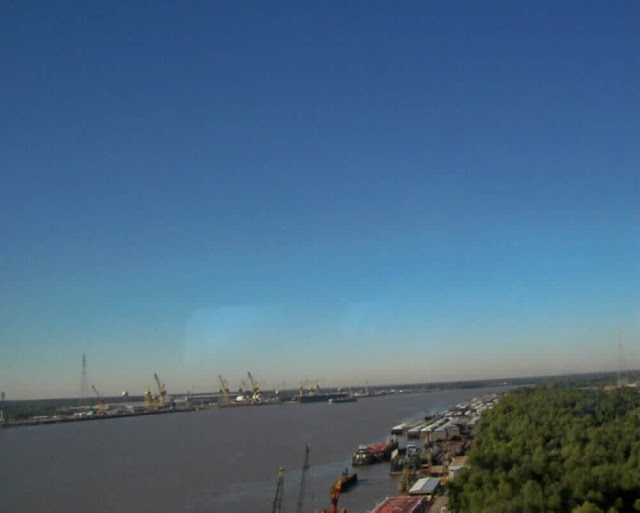 Over the river.  Soon to go through the woods, but first there's the west approach to descend. 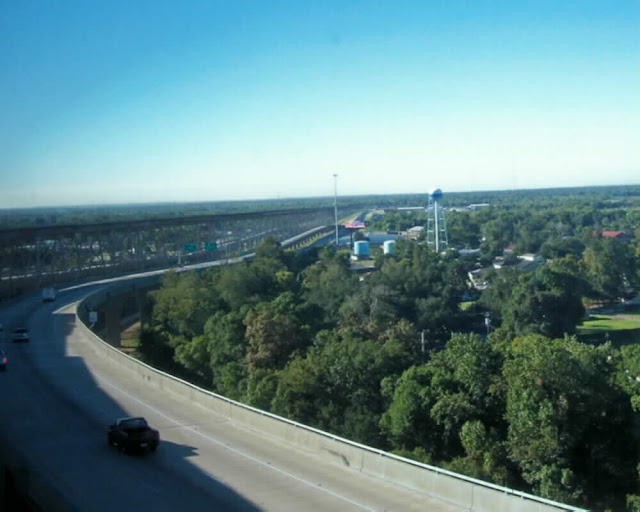 Motor vehicles are over-powered and over-braked compared with trains, thus they can descend to ground level more quickly.

The Sunset runs on the historic Sunset Route, which Southern Pacific conveyed to BNSF a few years ago.  The Louisiana and Delta Railroad also have a presence in the area. 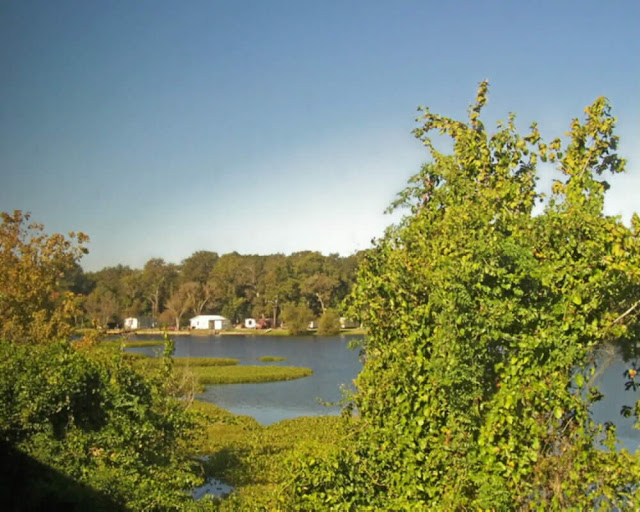 Plenty of time to contemplate this waterway, probably capable of providing cottonmouths and alligators.  Train makes abrupt stop, sound of emergency brake, it's near a grade crossing, think the worst.  Broken airhose.  Stop 9.55, go 10.05, Schriever 10.45 - 10.49.  Railroad is close to Interstate 10 and U.S. 90 most of the way across Louisiana.  Not much chance of blowing the doors off the motor vehicles the way Train 90 from Nürnberg to Hamburg did along the Autobahn in the neighborhood of the Fulda Gap. 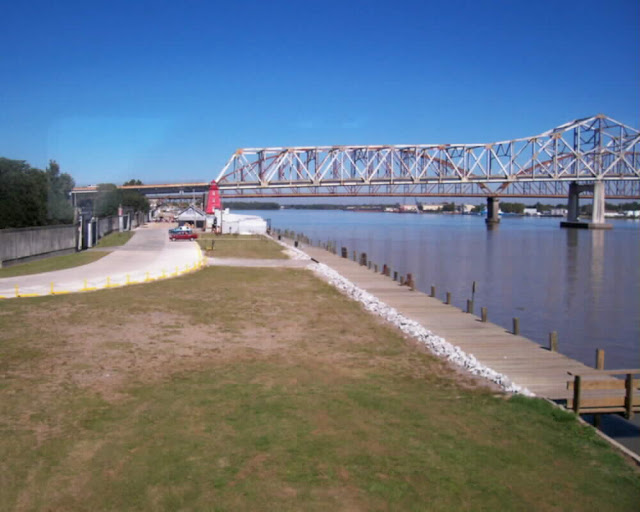 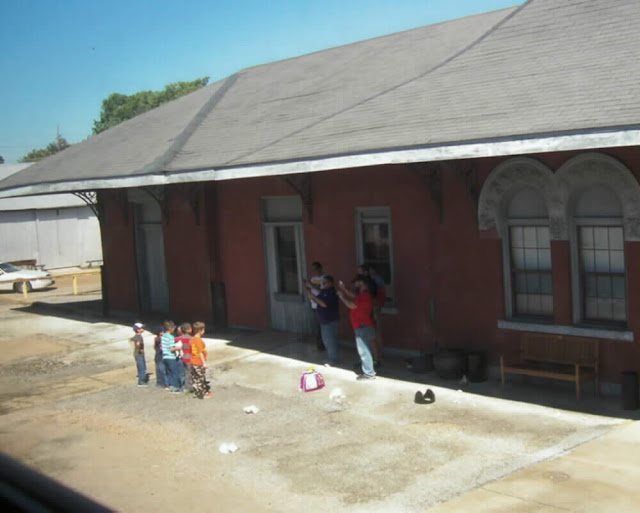 Time for a few group pictures before these youngsters get on the train. 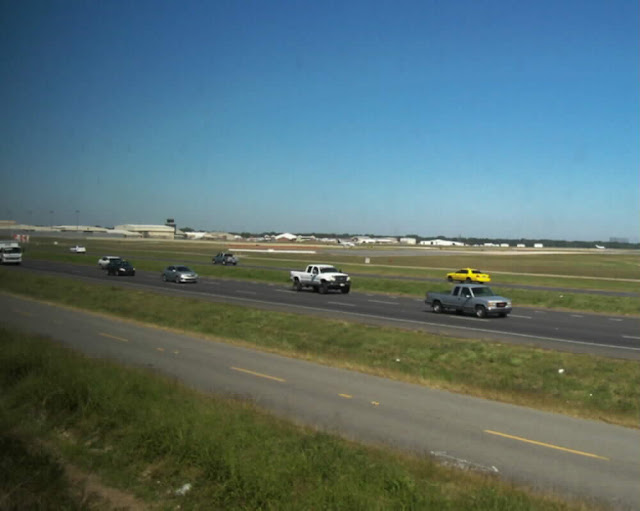 The interstate, a frontage road, and the Lafayette regional airport (appears to cater to small scheduled planes.)  Lafayette 12.54 - 1.02.  At least not losing more time. 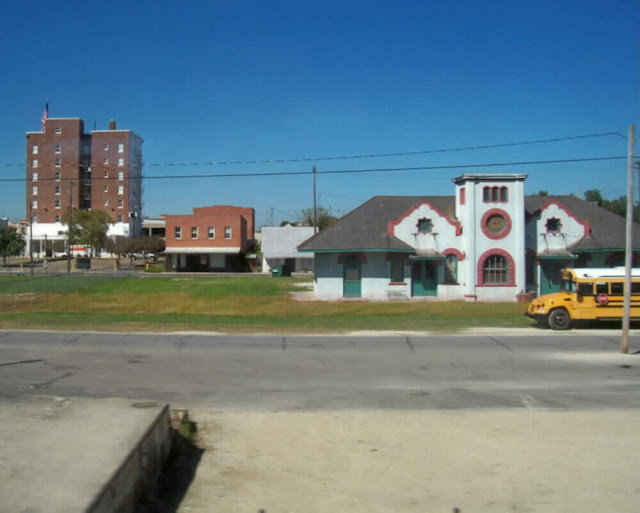 Looks like a former Southern Pacific station back there, the facilities for passengers on this side of the street are rudimentary.  But with one train thrice a day, what's the point?  Pass Crowley 1.28, Lake Charles 2.22 - 2.26, Sabine River is the state line. 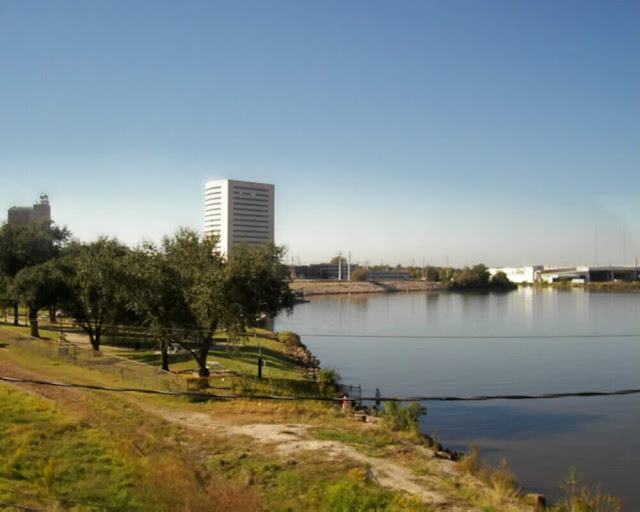 Kansas City Southern's Port Arthur main line is the superior road coming into Beaumont, and they behave accordingly.  Wait 3.30 - 4.07, crew change and smoke stop at Beaumont 4.16 - 4.32.  Sun angle doesn't favor photography.  Next stop Houston, 82 rail miles and 150 minutes away.  Ach du Lieber!  Houston 6.23 - 6.55, another smoke stop, chance for people so inclined to go into the station, which you wouldn't mistake for Chicago Union Station or London Paddington.  There's enough recovery margin to be in five minutes late and away on time.  And there won't be another westbound train until Monday.  Next scheduled stop is San Antonio, 210 miles and 310 minutes away.  Pass Seguin 10 pm, fuel stop at Kirby yard outside San Antonio, 10.52 - 11.06, into San Antonio 11.16.  The old rule about not passing a time point before your time must no longer apply.  But I'm to my hotel and thinking about turning in before the train's scheduled arrival time.  No inclination to hang around the station for 21 and the connection.
Posted by Stephen Karlson at 16:49